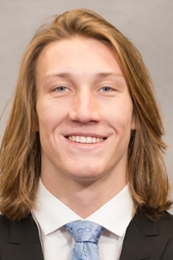 Quarterback
B I O

Entered 2020 having completed 527-of-804 career passes for 6,945 yards with 66 touchdowns and 12 interceptions in 1,610 snaps in 30 career games (26 starts) … also enters 2020 with 967 rushing yards and 10 rushing touchdowns on 163 career carries … started the final 11 games in 2018 as a true freshman in helping Clemson become the first major college football team in the modern era to go 15-0 … helped the squad win each of its last 10 games by 20 points or more … became the first true freshman quarterback to lead his team to a national title since 1985 … was a consensus freshman All-America honoree who earned a bevy of nation-wide and conference-wide honors for both his athletic and academic success.


2020: AFCA Good Works team selection … completed 22-of-28 passes for 351 yards and a touchdown and also added two rushing touchdowns at Wake Forest, the first game of 350-plus passing yards and multiple rushing touchdowns by a Clemson player since Tajh Boyd against NC State in 2012 … his passing touchdown at Wake Forest was the 67th of his career, moving him into the Top 10 in ACC history … set Clemson records for passing yards (351) and total offense (327) in a season opener in the performance against Wake Forest, earning ACC Quarterback of the Week and team offensive player of the game honors … completed 8-of-9 passes for 168 yards and three passing touchdowns and also added a two-yard rushing touchdown vs. The Citadel … completed 25-of-38 passes for 329 yards with three touchdowns and no interceptions vs. Virginia, his ninth career 300-yard passing game … completed 29-of-41 passes, both season highs, for 292 yards with three touchdown passes and also rushed eight times for 34 yards with a rushing touchdown vs. No. 7 Miami, collecting ACC Co-Quarterback of the Week honors … completed 24-of-32 passes with career highs in passing yards (404) and passing touchdowns (five) at Georgia Tech, becoming the fourth Clemson quarterback to win 30 career games as a starter … his performance at Georgia Tech was his first career 400-yard passing game and the 10th by a Clemson quarterback all-time … his five-passing-touchdown output at Georgia Tech was the first by a Clemson quarterback since Deshaun Watson’s six-touchdown performance against South Carolina in 2016 … he threw an interception on his 12th pass attempt at Georgia Tech, ending a streak of 366 consecutive passes without an interception, the second-longest streak in ACC history and 13 pass attempts shy of matching the ACC record held by NC State’s Russell Wilson (379 from 2008-09); with 2020 being a leap year, Lawrence went 364 calendar days between interceptions dating to his last pick at Louisville on Oct. 19, 2019 … completed 22-of-27 passes for 391 yards with five touchdowns in the first half alone at Georgia Tech, setting school first-half records in both passing yards and passing touchdowns … earned ACC Quarterback of the Week and sharing team offensive player of the game honors for that performance at Georgia Tech … completed 27 of his career-high 43 passes for 289 yards with two touchdown passes vs. Syracuse … unavailable vs. Boston College and at No. 4 Notre Dame … completed 26-of-37 passes for 403 yards (one shy of his career high) with two touchdowns and no interceptions vs. Pitt, improving to 32-1 as a starter to tie Rodney Williams, Tajh Boyd and Deshaun Watson for the school record for wins as a starting quarterback.


2018: Maxwell Award finalist … Manning Award finalist … Davey O’Brien Award semifinalist … freshman All-America selection by the FWAA, ESPN, USA Today, The Athletic and 247Sports … Touchdown Club of Columbus Archie Griffin Award recipient (Most Valuable Player) and Freshman of the Year … Shaun Alexander Freshman of the Year … ACC Rookie of the Year … ACC Offensive Rookie of the Year … second-team All-ACC … AP ACC Newcomer of the Year … All-ACC Academic selection … completed 259-397 passes for 3,280 yards with 30 touchdowns and four interceptions in 768 snaps in 15 games (11 starts), while also contributing 60 carries for 177 yards and a touchdown on the ground … set school freshman records in passing yards, passing touchdowns and wins as a starting quarterback … finished the season having thrown 169 consecutive pass attempts without an interception, breaking Cullen Harper’s single-season school record of 143 in 2007 … completed 9-14 passes for 137 yards and three touchdowns in collegiate debut vs. Furman … went 5-9 passing for 93 yards including a 64-yard touchdown at Texas A&M … completed 12-19 passes for 194 yards with a touchdown vs. Georgia Southern … Threw for 176 yards on 13-18 passing with four touchdowns in earning ACC Rookie of the Week and team offensive player of the week honors at Georgia Tech … against the Yellow Jackets, became the first Clemson freshman to throw four touchdown passes since Watson on Sept. 27, 2014 (six vs. North Carolina) … made first career start vs. Syracuse but exited early with an injury after completing 10-15 passes for 93 yards … playing on his 19th birthday, completed 20-25 passes for 175 yards with two touchdown passes and no interceptions at Wake Forest … threw for a then-career-high 308 yards on 26-39 passing with one touchdown vs. No. 16 NC State … earned team offensive player of the week and ACC Rookie of the Week honors for the performance against the Wolfpack, as his 308 passing yards were the most by a Clemson passer since Kelly Bryant’s 316-yard day at Louisville in 2016 … completed 20-37 passes for a then-career-high 314 yards and tied his career high with four passing touchdowns at Florida State, earning ACC Co-Rookie of the Week and breaking Deshaun Watson’s single-season school records for passing touchdowns and passing yards by a true freshman … completed 8-12 passes for 59 yards with two touchdowns vs. Louisville and helped direct an offense that broke a 115-year-old school record with 11.6 yards per play … posted then-career highs in completions (29) and pass attempts (40) for 295 yards with one touchdown and one interception at No. 17 Boston College, team co-offensive player of week honors from the team, ACC Rookie of the Week honors from the conference, and the Leather Helmet Award as the game’s most valuable player from the Boston College Gridiron Club … against Boston College, broke Deshaun Watson’s school record for total offense by a true freshman (1,666 in 2014) and also recorded his first career rushing touchdown on a six-yard scoring rush in the third quarter … completed 21-38 passes for 251 yards with two touchdowns vs. Duke, breaking Kyle Parker’s school record for passing touchdowns by a freshman (redshirt or otherwise) with his 21st passing touchdown of the season … earned school-record fifth ACC Rookie of the Week honor vs. South Carolina, completing 27-36 passes for a then-career-high 393 yards with one touchdown … his 393 yards against the Gamecocks were the most by a Tiger in the rivalry’s 116-game history … completed 12-24 passes for 118 yards with two touchdowns against Pitt, breaking Kyle Parker’s record (2,526 in 2009) for passing yards by a freshman (first-year or redshirt) during the contest … named Cotton Bowl Most Outstanding Offensive Player after completing 27-39 passes for 327 yards with three touchdowns vs. Notre Dame … also earned Offensive MVP honors in the National Championship Game against No. 1 Alabama after completing 20-32 passes for 347 yards, three touchdowns and no interceptions, becoming the first freshman starting quarterback to lead his team to a national title since Oklahoma’s Jamelle Holieway in 1985 … selected to Rivals’ All-Bowl Team for his performance in the College Football Playoff after becoming the first quarterback in 40 years to beat two Top-5 opponents by 25 or more points in a single season, according to ESPN, accomplishing the feat in the two Playoff contests.


Personal: Born Oct. 6, 1999 … marketing major … won the 2019 Tim Bourret Award, given to the player who best represents himself, his teammates and Clemson University in the media … two-time ACC Honor Roll selection (2018-19).