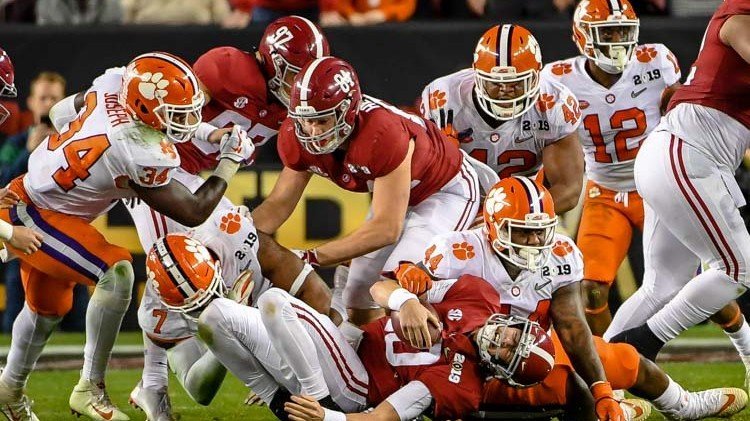 Corey Miller is salty. Really salty, and he’s not prepared to call Clemson the kings of college football, not as long as the Tigers wear cheerleader panties and hold parades.

Yes, you read that right. The hatorade and the hurt are strong.

The former Gamecock and NFL defender, and father to Alabama linebacker Christian Miller took to the airwaves late last week to talk about Clemson’s 44-16 win over Alabama in the National Championship Game. In the days leading up to the game, Miller was vocal about the Crimson Tide’s chances to once again beat Clemson and rule college football. After the win, however, Miller deleted his social media accounts.

He broke his silence during an interview with South Carolina Radio Network host Phil Kornblut, and for every sentence that Miller used to give the Tigers credit for the win, he used three more to discredit the victory.

“Alabama forgot to get on the plane and go to the West Coast, I think. It is what it is, a good win for Clemson, no doubt about it,” Miller said. “And it was ugly for Nick Saban and the Crimson Tide, but it's sports, and it happens. As I told someone yesterday, even the greatest in anything fall down, and I put Alabama in the category of being one of the greatest football programs in the history of college football. For whatever reason, they didn't play well and give Clemson a ton of credit. They were ready to play, and they deserved to win.

“The biggest thing for me, Alabama didn't have any juice in that ballgame. There was a lack of focus for whatever reason, and the team just wasn't ready to play. They had a lot of things going on with the coaching staff and guys moving around. You always worry about that at the end of the season. And not to take anything away from Clemson, but Alabama just wasn't ready to play. For whatever reason, they thought they could coast through, but they couldn't get things moving. I thought they could score 40-plus points on Clemson, and I thought the game would be flipped, honestly. I thought Alabama would win with that type of score.”

His son Christian didn’t play in the game, and Miller says Christian’s presence would have made a huge difference.

“Again, Christian not playing in that game hurt that defense a great deal and showed how much he meant to that defense with his outside pressure,” Miller said. “Trevor Lawrence was able to stand in the pocket pretty much at will. He could have gone but they didn't put him in there, and they didn't have a guy that was ready to play. So that hurt. It was just one of those games. It was flukish to me. You could just tell me it wasn't going to be Alabama's night. I don't want to minimize Clemson's win, but to me and maybe it's biased, but seeing this team five years in a row and this season it was more about what Alabama didn't do than what Clemson did. I pretty much assure you if Christian had played Trevor wouldn’t have been comfortable in the pocket.

“It was a bad game for the players and a bad game for the coaches. Again, not to take anything from Clemson because it was a very good ballgame for them. It's one game. One game. The team that he (Lawrence) played, played their worst game ever. It was nothing about ability or domination; this team played the worst game they've played in the Nick Saban era.”

Kornblut then asked if the Tigers’ performance made Alabama quit, and Miller bristled at the question before launching into an epic diatribe.

“No, they didn't make them quit. This team wasn't ready to start with. Alabama blasted Clemson last year, and that game could have been 50-3,” Miller said. “Does that mean Clemson was a bad football team? No, they were bad on that day. It is one game. And unfortunately, this is not MLB where you have to win five out of seven or three out of five. If that's the case, Alabama is a better football team. They have better talent. Did they play to that level? No. They didn't.”

He then took a shot at Clemson’s schedule.

“I will go back and say this. Clemson has had a cupcake, easy way to get there. Maybe Alabama is tired. Their road to get to the National Championship is ten times harder than what Clemson has to go through,” Miller said. “They got a horrible Notre Dame team that shouldn't have been in the playoff. It was a cakewalk. They rested. Alabama fought their way to get there. I can tell you this team wasn't ready to play. And beating Alabama for Clemson? That is why they had parades and turning cartwheels and are wearing cheerleader panties. That means something to them. For Alabama, they don't walk around saying that if they beat Clemson, they feel special. That is when you know you are the king of college football. When they beat Clemson last year, they didn't go around having parades and all this craziness and doing like Clemson fans do.

“That is the difference when you know you're different and you're used to winning championships. Clemson is not. Yeah, they have won two in three years, and they've had parades and went to eat cheeseburgers and poor man's food at the White House. Alabama - that is no big deal. That is what they expect. Clemson, now we will see what happens. Can they keep it up after losing nine men off that defensive front? Yeah, Trevor Lawrence is there. Yeah, we will see. Don't anoint Dabo Swinney as the next Nick Saban.”

He took one final parting shot at the Tigers when he was asked about the Gamecocks’ chances next season.

“I think they will get better, but the record might not indicate it because they play five Top-15 teams next season,” Miller said. “That's a real football schedule. Clemson, I would love to see them play that schedule week in and week out and see where they are.”