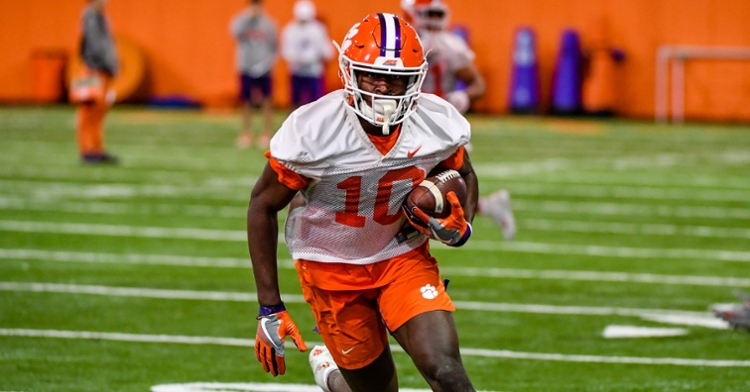 Joseph Ngata has had plenty of praise and he looks to build on that with a healthy 2021 campaign.

David Hood: Tyler Grisham has a problem, but it’s a good problem.

Provided that everyone is healthy (and that’s a big if), Grisham has a plethora of talent to work with this season. Let’s start with who needs to get healthy and stay healthy – Joseph Ngata, Frank Ladson, and Justyn Ross. If all three can shake off the injury bug, that’s three very talented wide receivers to throw out there at any given time. That is size and speed and ability. Add in EJ Williams, who put together a solid freshman campaign, and the list starts to deepen.

One has to think that Brannon Spector gets the first look at the slot receiver spot occupied by the likes of Hunter Renfrow and Amari Rodgers, but Troy Stellato will also get a look once he arrives on campus this summer. Until then, all of the receivers will cross-train to see who fits in at each spot. How about Ross and Williams (former high school teammates) on the outside at the same time with Spector in the slot? How about Ngata and Ladson on the outside with Williams slipping inside? How about Ajou Ajou bringing his athletic hops to the field?

Don’t forget freshmen Beaux Collins and Dacari Collins – head coach Dabo Swinney calls them the Collins Towers – who will each have a chance to make an impact this spring. Beaux Collins is already familiar with quarterback DJ Uiagalelei – they won a state championship together at Bosco – and word is already starting to leak out of the football building that he’s turning heads. One person told me that Collins is a “technician” who is as smooth as any receiver who has come through Clemson. Considering this is Wide Receiver U, that is saying a lot.

The hope is that new tight ends coach Tony Elliott – who also calls plays – will help this group get back on track. Braden Galloway and Davis Allen are known commodities and will only get better, while Jaelyn Lay and Sage Ennis are going to battle for reps. The freshman to watch is Jake Briningstool, who is 6-6 and a matchup nightmare for defenders. Like Grisham, Elliott has a lot of talent on hand, it’s just getting the right people on the field at the right time.

Brandon Rink: Clemson has three former 5-stars trying to work back from an injury-hampered 2020 to move into big roles this season. Ross is still awaiting full clearance (after surgery for spinal fusion) and he can obviously add a major boost to the 'WRU' lineup here with that clearance.

At full strength, Ladson is a real playmaker downfield to fill in (and more) for the impact Cornell Powell made last season. Ngata has had a lot of hype from coaches and we’re still waiting to see just what he can do. He looks to regain the form that brought that praise and it'll be interesting to see where he fits positionally when Ross comes back. Williams showed what he can do as a freshman and seems like an ideal fit for the boundary receiver role. You figure the spring will be useful for cross-training for any number of scenarios next season but maximizing the talent here is of prime importance out of the gates with a top-5 opener against Georgia.

Spector’s versatility has been lauded but this season might just be the one where he earns his stripes in that familiar No. 13 jersey for slot receivers. The Tigers could also rotate-in one of those highly-rated talents in the slot at times, whether Williams or Ross possibly to give another downfield threat similar to Ross’ freshman and Clemson’s last national-title season (2018).

For the tight end group, Elliott has plenty to work with, now even adding a No. 1-rated prospect in Briningstool. Galloway will look to add more tools to his skillset in hopes of a career beyond the college game, while Allen looks for the same after a solid sophomore campaign. Graduate Luke Price is set to return in 2021, but he did suffer a torn ACL late in fall camp last year. He logged over 200 snaps in the 2019 season primarily in a blocking role.