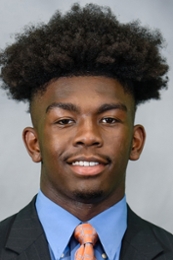 2018: Recorded 46 receptions for a team-high 1,000 yards with nine touchdowns in 343 snaps over 15 games … freshman All-America selection by 247Sports … scored a touchdown on a 15-yard catch-and-run in his college debut vs. Furman … recorded his first career 100-yard game against Georgia Southern, gaining 103 yards on three receptions including a 57-yard touchdown … scored a 53-yard touchdown in his lone reception at Georgia Tech, becoming the first Clemson player to catch touchdown passes of 50 yards or more in back-to-back games since Artavis Scott vs. South Carolina and Oklahoma in 2014 … gained 40 yards on three receptions vs. Syracuse … hauled in a 55-yard touchdown pass amidst his five receptions for 74 yards at Wake Forest … became the first Clemson player to score three receiving touchdowns of 50 yards or more in a single season since Scott in 2014 (four) … caught five passes for 75 yards vs. No. 16 NC State … gained 41 yards on one reception at Florida State … caught two passes for 74 yards including a 59-yard bomb for a touchdown from Chase Brice vs. Louisville … gained 19 yards on three receptions at No. 17 Boston College … earned team offensive player of the week honors for his four-catch, 76-yard performance with a touchdown vs. Duke … gained 58 yards on three receptions vs. South Carolina … caught two passes for a team-high 70 yards in ACC Championship Game against Pitt … gained 148 yards on six receptions including second-quarter touchdown grabs of 52 and 42 yards against No. 3 Notre Dame in the Cotton Bowl … his 137 yards in the opening two quarters set a first-half Cotton Bowl record, as did his 24.7-yard average for the game … posted game highs in receptions (six) and receiving yards (153) and caught a 74-yard touchdown in the National Championship Game vs. No. 1 Alabama … earned All-Bowl team honors from both the AP and Rivals after combining for 12 catches, 301 yards and three touchdowns in two College Football Playoff games.

Before Clemson: No. 15 player in the nation by Rivals, No. 45 player by 247Sports and No. 74 player by ESPN … No. 2 wide receiver in the nation by Rivals, No. 11 wide receiver by ESPN and No. 15 wide receiver by 247Sports … No. 1 player in Alabama by ESPN and Rivals; became the first top-ranked player from Alabama to sign with Clemson, and was just second top-ranked player in Alabama who did not sign with Alabama since 2005 … had 37 receptions for 730 yards and 13 touchdowns as a senior, leading his team to a 12-1 record and the state semifinals … had 14 punt returns for 383 yards and two touchdowns as a senior … AAAAAAA back-of-the-year, first-team all-state and finalist for Mr. Football as a senior … played basketball at Central High School … from the same school as former Tiger Marvin Sims, who was Clemson’s second-leading rusher in 1978 and top rusher in 1979 … coached by Jamey DuBose at Central High School … recruited by Todd Bates and Jeff Scott.