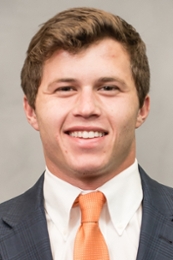 Wide Receiver
B I O
Appeared in 31 snaps over eight career games prior to 2019 bowl season.

2019: Appeared in 19 snaps over five games … caught an eight-yard pass and recorded a 13-yard punt return vs. Charlotte … gained three yards on a punt return vs. Wofford.

2018: Played 12 snaps over three games … made Clemson debut vs. Louisville … and also played vs. Duke and in the Cotton Bowl vs. No. 3 Notre Dame.

Recent Stories on Will Brown