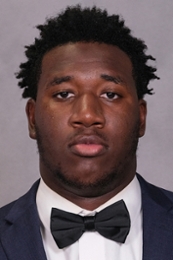 Tight End
B I O
Played 46 snaps over four games prior to 2019 bowl season while redshirting.

2019: Played 46 snaps over four games while redshirting … Caught a 20-yard pass in his collegiate debut vs. Georgia Tech.

Before Clemson: Rated as one of the top five tight ends or H-Backs in the nation by ESPN and Rivals … ESPN ranked Lay as the fourth best tight end/H-back, while Rivals ranked him fifth in that position … ranked as the No. 165 best all-around player in the nation and 16th-best player from the state of Georgia … ranked as the 21st-best overall tight end by 247Sports … helped Riverdale High School to an 8-4 record in 2018 … had 29 receptions for 240 yards and four touchdowns in 2017 … had 7-119 and a touchdown in 2016 … at 6-6, is tied for the tallest tight end in Clemson history … played his high school football at Riverdale High School for Rodney Hackney … Clemson recruiters were Mike Reed and Danny Pearman … older brother is a student at West Point … committed to Clemson on March 3, 2018 … enrolled at Clemson in January 2019.