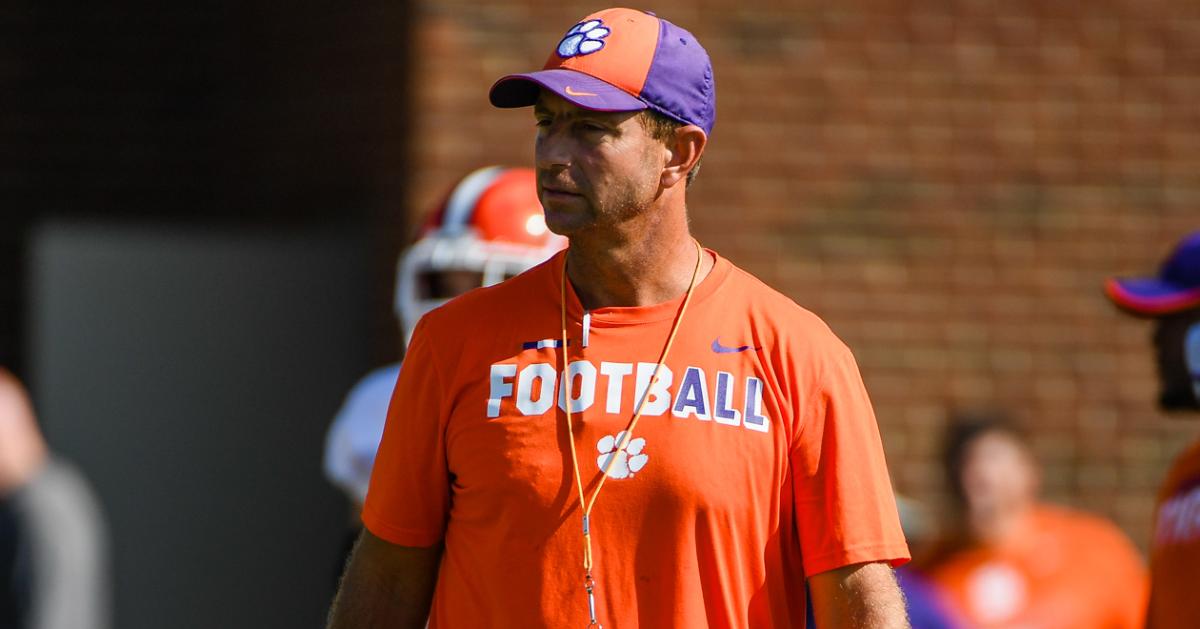 Swinney said the Tigers did not play winning football Saturday

CLEMSON – Clemson practiced at Jervey Meadows Monday afternoon with the bad grass, the heat, and the gnats, a tougher situation than practicing on the Tigers’ perfectly manicured practice fields. Just the way head coach Dabo Swinney likes it.

“It's lumpy. It's not perfect. There is no shade. It's just a little bit tougher, mentally,” Swinney said after practice. “But it's good. It's just a part of what we do and part of our preparation for the team mentally and physically. Just kind of old school it a little bit. Kind of like we say - live modern and train old. That is what we are doing right now. We will either be here or at the stadium the rest of the way.”

The Tigers scrimmaged Saturday in Memorial Stadium and Swinney said the Tigers are a long way from playing winning football, especially defensively.

“Defensively, we have a bunch of guys who are playing hard but there are way too many mistakes. It's just not winning football right now,” Swinney said. “But that is what Saturday was about - let's stick a thermometer in there and figure it out. Some guys we need to turn the heat up on. Some guys are right on schedule. And with some guys, I need to turn it down a little bit. I don't need to overcook it. That is just where we are. I needed to get an assessment and we did and we spent Saturday night and Sunday teaching. A lot of teaching and correcting. Because guys need to see it. They need to see what they need to improve.

“We were so far from winning football Saturday it's not even funny. We are repping a lot of guys and we have guys here and there who are out, but nowhere near game ready. The effort was fine and all that. But way too many mistakes. Sloppy football.”

The team will continue with installs before another big scrimmage Thursday.

“Tomorrow is a big day for us - it's all situations. It's not a long day but we have a lot of situations to cover. We have a 35-play script with each group, situation stuff, to get on tape. Live work,” Swinney said. “And then we will come back tomorrow night with a walk-through, continue our installation Wednesday and then Thursday come back with a big scrimmage. And that will be our last full all-out scrimmage. It's a big week for us.

“We have a lot of installation we have to get in, but we have to get better. We have to get into this next scrimmage and then start making a few decisions. Friday we will kind of lighten the load a little bit and then we will give them Saturday and Sunday - everybody - to rest and recover and recharge and come in here Monday and it's game prep time.”

I asked Swinney which of the true freshmen will avoid a redshirt, and he didn’t hesitate.

Corner Derion Kendrick is still out but Swinney hopes to have him back next week. Linebackers Jake Venables and Baylon Spector are out with hamstring injuries. Tight end Jaelyn Lay was back at practice today after missing the scrimmage. Swinney is still waiting on freshman tight end Davis Allen to be cleared, and he made it clear he thinks Allen could make an impact this year.

As for the tight ends – JC Chalk is the clear starter, with Luke Price sitting in the number two.