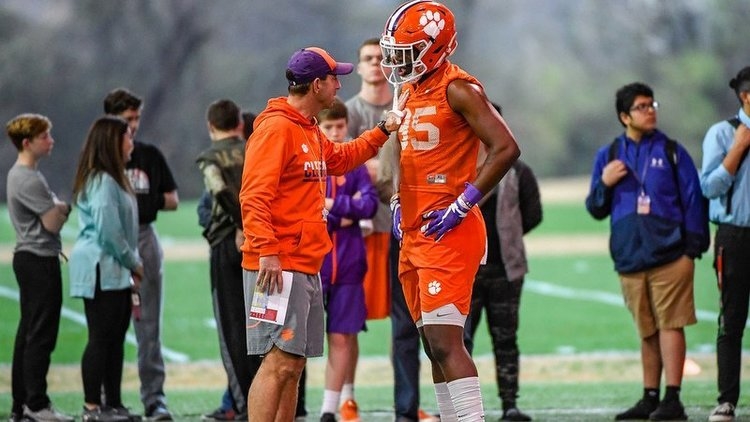 CLEMSON – Yes, Trevor Lawrence is pretty good and Travis Etienne will be one of the nation’s best running backs, but two of Clemson’s younger players are standing out to head coach Dabo Swinney.

The Tigers scrimmaged in Memorial Stadium Thursday morning, the last major scrimmage of fall camp, and Swinney said the usual suspects showed out.

“Trevor. He is pretty good,” Swinney said with a smile. “I think that first group up front has a chance to be pretty good. We have got some backup guys that will be able to help us, too. But that first group has done a really nice job. Travis had his most extensive day and he needed it. He needed a day like today and made some nice plays. He had a couple of touchdowns.

At the tight end spot, however, freshman Jaelyn Lay has made the most strides.

“Probably the most improved player from the spring is Jaelyn Lay. He missed the first scrimmage,” Swinney said. “That doesn't mean he is Dwayne Allen, just yet. But from where he was in the spring, he is the most improved player and is probably going to be able to help us I am really pleased with him. He is playing with confidence and he's catching the ball. He made some tough catches and he's playing fast. He's still a work in progress. That's a very difficult position in our scheme, but he is much, much improved which is a big shot in the arm for us.

“And Luke Price is another guy that's going to help us for sure. We are just kind of waiting to get Davis (Allen) back. He has been doing everything he needed to do, but we are waiting for them to cut him loose so he can physically go do it. It's a shame he missed camp. I was hoping he could help us and maybe he still can. But until we see him do it full speed it's hard to be sure. But I think he has the right mindset.”

Sophomore offensive lineman Jackson Carman – who will likely start at left tackle – is another player that has stood out.

“Another guy that I love to brag on is Jackson Carman. He has had a great camp. Really matured and grown-up,” Swinney said. “It's amazing what a difference a year makes with some of these people. It's just amazing. These young people just transform when they put their mind to it and get serious about it. He's just a different guy in every aspect of it. He has worked really hard this past year and I'm really proud of him. He's showing up early and putting in extra time. He's strong and probably one of the smartest players we have on this team just from a football IQ standpoint. I am very encouraged by what I've seen out of Jackson.”