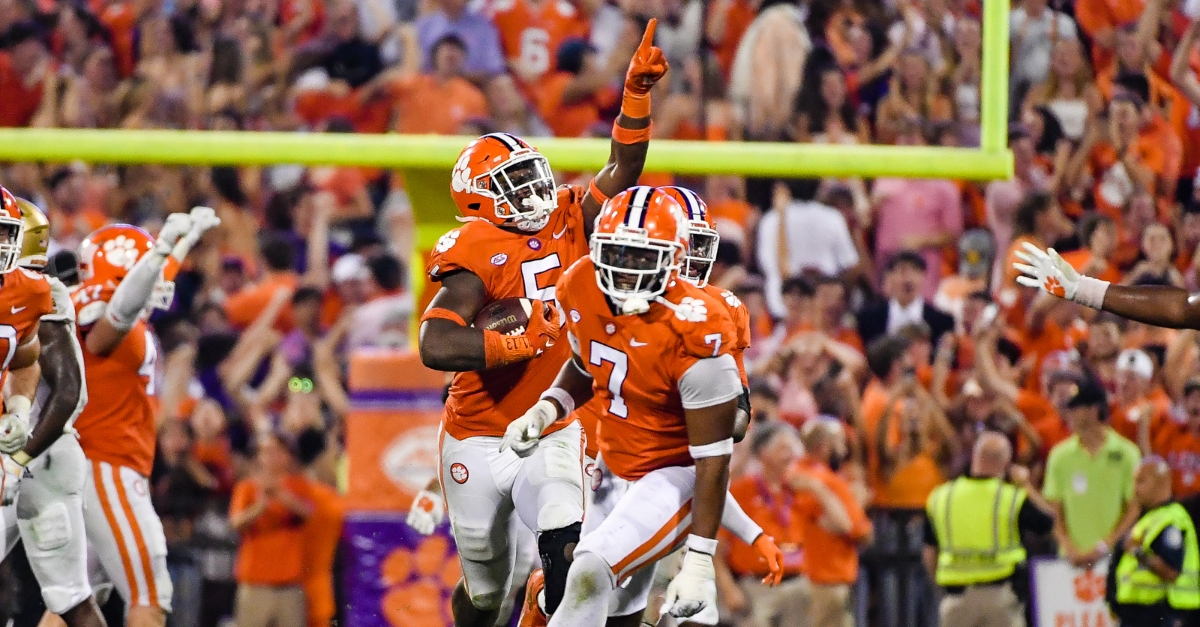 KJ Henry carries the ball off the field after recovering a late fumble.

CLEMSON – With Clemson’s football team resembling a MASH unit and the offense struggling to finish drives, the Tigers’ defense gained energy and life from a raucous Homecoming crowd and helped fashion a gritty, ugly, but also thrilling 19-13 victory over Boston College Saturday night in Death Valley.

KJ Henry recovered a Boston College fumble with 49 seconds remaining, securing the win over the Eagles. Trailing by just six, Boston College reached the Clemson 11 with plenty of time left on the clock, but the crowd did its part in forcing several late errors.

The Clemson offense was better, rolling up 438 total yards, but it failed to finish drives. Kobe Pace had 19 rushes for 125 yards while Phil Mafah added seven for 58 yards. Joseph Ngata caught four passes for 111 yards.

Swinney gave credit to the crowd for the win.

"I am super proud of our team. Unbelievable football game. Amazing crowd. I thought our crowd was the difference in the game tonight," Swinney said. "They were absolutely amazing, all to the way to the last play. They affected the game the way a crowd can do. It was awesome to be a part of a night game in the Valley again. At the end of the day, we have a long way to go, but just a great job of getting the win against a good BC team. That was the objective, somehow, some way."

Despite losing so many players to either ejection or injury, the team found a way to win.

"Just proud of the way our guys responded. A lot of fight and a lot of heart," Swinney said. "I've seen that all year. This team's will to win is special. They have been in a position to win every single game even though we certainly haven't played in a couple of those games. Tonight it was on full display. We were down 10 or 11 guys, and a bunch of them we lose during the game. It was crazy. We had a MASH unit going on."

The Tigers took the opening kickoff and quickly moved into Eagle territory, but they failed to convert on a fourth down for a turnover on downs. The defense forced a Boston College punt and the Tigers took over at their own 14. A 17-yard pass to EJ Williams started the drive, and four plays later Kobe Pace followed blocks by Matt Bockhorst and Walker Parks over the right side, racing almost untouched for a 59-yard scoring run that brought the amped-up crowd to its feet. Midway through the first quarter, the Tigers held a 7-0 lead.

The Eagles responded with a 10-play, 70-yard drive that ended with a Connor Lytton 22-yard field goal. With exactly three minutes remaining in the first quarter, Clemson led 7-3.

The teams traded punts but starting tight end Davis Allen was ejected after being called for targeting. Braden Galloway went out with an injury earlier in the game, leaving Sage Ennis, Jake Briningstool, and Jaelyn Lay as the main options.

Clemson took over at its own four after an Eagle punt, and freshman running back Phil Mafah broke off a 10-yard run to spark the drive. Uiagalelei followed that with a 14-yard drive, and then he picked up the blitz two plays later and hit Joseph Ngata for a 25-yard gain down the sideline. Mafah then found his way for a 28-yard gain to put the Tigers inside the 10, but Clemson settled for an 18-yard field goal from BT Potter. With just over 10 minutes remaining in the second quarter, Clemson led 10-3.

On the ensuing possession, BC quarterback Dennis Grosel’s third-down pass was tipped and it floated into the hands of safety Nolan Turner, who rolled under the ball at the 50. The Tigers earned a quick first down but wound up settling for a 40-yard field goal from Potter for a 13-3 lead at the 7:07 mark.

The Eagles, aided by a horrendous roughing the passer call early in the drive, spent the rest of the half dinking and dunking their way down the field, settling for another Lytton field goal that made it 13-6. The drive covered 15 plays and 58 yards and took 6:48 off the clock, leaving just 19 seconds.

The Eagles took the opening kickoff of the second and marched straight down the field. Pass plays of 33 and 39 yards set up a three-yard run by Patrick Garwo. Just 55 seconds into the second half, the score was tied at 13-13.

The teams muddled through two drives apiece, never gaining any traction, but another Grosel interception led to Tiger points. Grosel sailed the ball over his wide receiver’s head and RJ Mickens made a diving catch at the Eagle 33. However, Uiagalelei missed more than one easy throw and the Tigers had to settle for a 35-yard field goal from Potter. Late in the third quarter, Clemson led 16-13.

Clemson’s defense continued to hold the Eagle offense at bay, battering and knocking Grosel around the yard while the offense continued to sputter. Midway through the fourth quarter, Ngata broke loose on a 54-yard pass-and-catch, but an ineffective RPO run to the middle and two dropped passes killed the drive. Clemson settled for a 45-yard field goal and led 19-13 with 4:51 to play.

Boston College engineered a drive into Clemson territory but the crowd forced two procedure penalties and an ineligible receiver downfield that made it 1st-and-25 at the Clemson 47. A 16-yard pass to Zay Flowers set up 2nd-and-9, but the Tigers forced three consecutive incompletions and a turnover on downs with 2:14 to play.

Clemson tried to run out the clock and the Eagles started to use their timeouts and facing a 3rd-and-3 at the 30, Uiagalelei rolled out and was sacked for a loss of nine yards. A Will Spiers punt gave Boston College the ball at the Boston College 36 with just under two minutes to play, and Grosel quickly moved the Eagles to the Clemson 11-yard line. A first-down pass was broken up, and on second down the crowd was so loud that Grosel looked surprised by the snap. The ball hit Grosel in the hands and then the new grass, where KJ Henry gobbled it up to secure the win.

Clemson is off next week, then travels to Syracuse for a Friday night game on Oct. 15th.

The play that sealed the deal.

Get you some, Kobe!

Clemson-BC box
Get the latest Clemson gear right here!
Comment on this story