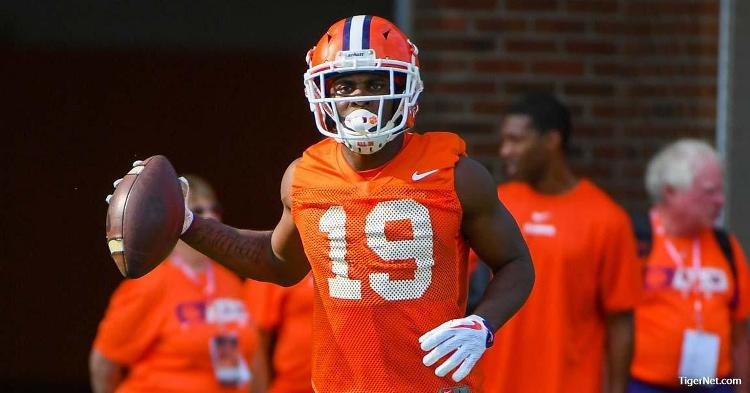 MIkey Dukes is impressive coming out of the backfield

CLEMSON – August camp is the time when certain freshmen begin to push for playing time and avoid a redshirt, and several of the Tigers’ top rookies are beginning to catch the eyes of the coaches.

Co-offensive coordinator Tony Elliott met with the media following Friday’s practice, and he started out by talking about running backs Mikey Dukes and Chez Mellusi. Dukes has already made an impression catching the ball out of the backfield.

“I think Mikey’s got the most natural ball skills of any guy that I’ve had, including (Andre) Ellington,” Elliott said. “It’s just easy for him. You can see it.”

Both Dukes and Mellusi bring something special to the offense.

“They complement each other very, very well. I think we all know Chez is the bigger guy. He’s got really, really good straight-line speed. He doesn’t mess around. He’s a one-cut guy, understands that no cut is the best cut,” Elliott said. “Where Mikey is an elusive guy that catches the ball extremely well. Probably has the best ball skills of anybody I’ve ever had here at Clemson. So I think they’re going to complement each other that way.”

“You realize he is playing the tight end position. He is the formation adjuster. He is the run game fitter. He has to run all the pass routes. Here is a guy who played wideout, and no he happens to be in every aspect of the offense. “So maybe the expectations were a little unrealistic for a guy coming in the door.

“He is catching the ball well. He is moving well. He is fighting. He is tough. You are starting to see those things because the game is a little bit slower because he has worked with Garrett (Williams) over the summer and he has had J.C. Chalk in his ear. So, he is a lot more confident. You are seeing that. He is a guy that hopefully we can get back on the field and get back to work. I am encouraged where he is.”

“Light years. You can just see it. Not many guys have the ability that Jordan has. He can just move people. He is not the biggest guy, but he has leverage and strength and explosiveness. He can move people. That is only if he is playing fast. That is what we are seeing. He is playing fast because it has slowed down for him. He understands what he is doing.”

OL Hunter Rayburn and Will Putnam and Kaleb Boateng

“Rayburn, I am excited about his future. I think he is really, really dialed in at center right now. You can tell that he gets it. He is very athletic. (Will) Putnam is just a mauler. He loves it. He is a lot like Gage. He has that mentality. He is nasty. Things are still moving fast. Kaleb (Boateng) is better. He has improved from the spring. Things are still moving a little bit fast. We got him playing a little bit at tackle at a time, trying to find where the right spot is for him. It is probably moving the fastest for him.”