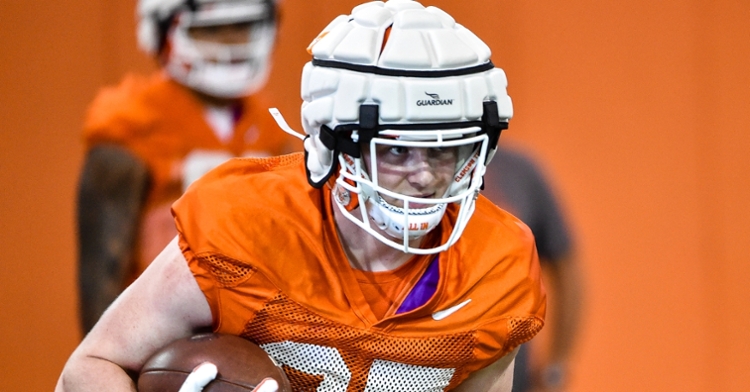 CLEMSON – Sage Ennis has made the transition from rag doll to contributor.

He was the only one of the three to record a reception.

“It was pretty exciting. I was excited. I just had to tell myself this is what I came here for,” Ennis told TigerNet. “You just got to be prepared. (It) goes into that preparation that we talked about all week and going back to mat drills all the way back in the offseason, and winter. Just goes back to that preparation and be mentally tough and being ready for the moment."

With Galloway already in the locker room, Allen was called for targeting and ejected from the game. Head coach Dabo Swinney made his way down the sideline to where Ennis was standing for a conversation.

Ennis weight just 220 pounds when he walked on campus last season (he hovers around 235 now) and remembers an early practice.

"Yeah, I remember when I early enrolled before the pandemic hit,” Ennis said. “I just remember everything was going so fast and bullets were flying. I really just remember one time I got rag-dolled around, and I wasn't used to that.

"I just wasn't used to that and so when that happened I kind of never wanted that to happen again. I didn't want to get manhandled. So from there on, I made it a choice and a priority to make sure that I was gonna put myself in the best situation, and learn from others and continue to get stronger and understand the blocking game better, so I wasn't being thrown around by KJ (Henry), XT (Xavier Thomas), and (Justin) Mascoll."

Now that he has some experience, Ennis is preparing for to contribute at Syracuse Friday night.

"Syracuse does a great job at flying around. You can see with how they just played Wake,” Ennis said. “They ran a lot of blitzes up the middle trying to stuff that run game -- the RPO game that they have -- and I think they did a really good job doing that. I really think at the end of the day, we just got to be prepared, because they do have a lot of movement. They do a lot of three-down type of guys, so that gives them the ability to have four backers in the box. And I think we got to, tight ends especially, be on our P's and Q's and in the passing game -- when we're pass protecting and just understand who we got and do a great job communicating with the offensive line."