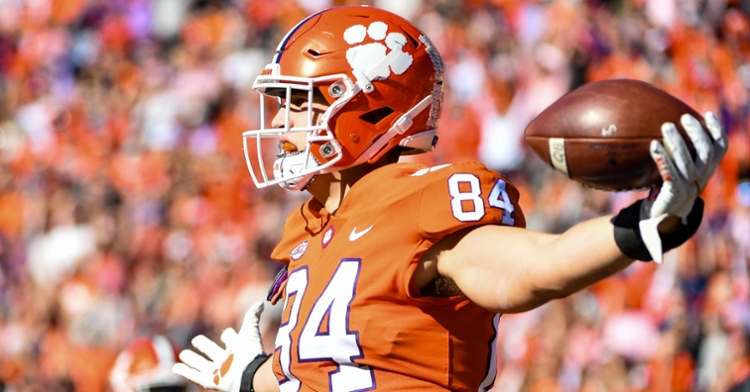 Davis Allen was counted on as the injuries mounted among the Clemson receiver group.

Clemson football put a wrap on another double-digit win campaign recently, and with the help of analytics, we take a deeper look into the 10-3 Tigers season by position, continuing with the Clemson tight ends.

Although PFF doesn’t rate Davis Allen among the top tight ends in the ACC, he was a big target that generally caught it when he was thrown to. His most memorable reception in 2021 came on a pass from running back Will Shipley. Davis Allen will return for his senior season and hopefully become a bigger part of the offense.

There’s obviously a big gulf between the poor PFF evaluation and what Clemson coach Dabo Swinney saw that led him to give Ennis 203 offensive snaps. Only a redshirt freshman in 2021, we’ll see if there is a well of untapped potential that springs forth once the light turns on.

There’s no way to sugarcoat the down season Galloway had before injury. He struggled across the board in what many thought would be his breakout season. He was targeted 10 times and only caught four passes for 14 yards, missing the final six games of the season due to a shoulder injury. His PFF grades decreased each season he played at Clemson.

It was a limited sample with just 104 offensive snaps, but tight end Jake Briningstool had a sterling freshman season. He was a high four-star prospect and is off to a good start in terms of living up to that hype. Despite being the slimmest of the Clemson tight ends, Briningstool is a quality blocker. Expect him to split time with Davis Allen in 2022 and possibly become the starter in 2023.

Back in 2016, TE Jordan Leggett had 736 yards and seven TDs. Clemson’s entire tight ends group didn’t accumulate even half of that in receiving yardage in 2021 (304 yards). Since Leggett’s departure, production from Clemson’s tight ends has been minimal, averaging just 338 yards per year in the five seasons since he left. Multiple assistants (Danny Pearman and Tony Elliott) have coached the position over that span.

When Clemson’s wide receivers are dominant, they don’t need a major receiving threat at tight end. In Clemson’s 2018 National Championship season, tight ends only accumulated 161 yards. Unfortunately, the wide receivers struggled this year (we graded them at a D). More production from tight end could play a big role in helping the offense return to form. The good news is Allen is returning for his senior season and Briningstool looks primed for a big sophomore year. That duo could help get Clemson back to the production fans remember from the days of Michael Palmer, Dwayne Allen, Brandon Ford, and Jordan Leggett.