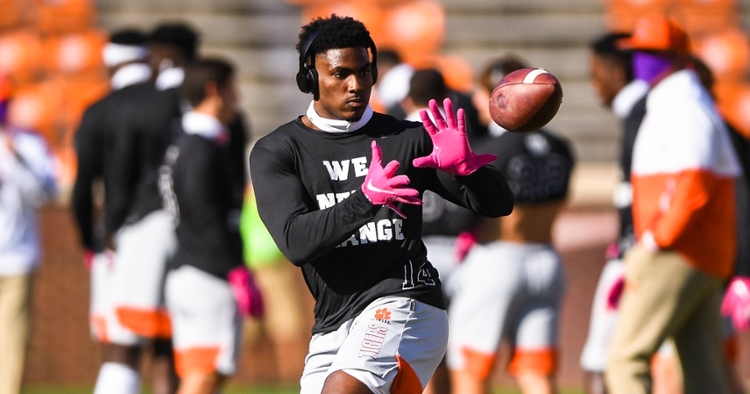 Kobe Pace figures to get a longer look this spring after limited action after enrolling last summer. (ACC photo).

David Hood: You would think that Lyn-J Dixon, heading into his fourth season with the Tigers, would be the logical choice to start at running back. He’s been patient and bided his time behind Travis Etienne, and I thought at the end of last season he was playing some of his best football. But he’s also inconsistent and you have to believe that CJ Spiller’s first message to his new group will be, “The depth chart is wide open. Come in and claim your job.”

I like what Mellusi brings to the table – he’s got enough speed and is tough enough in between the tackles to be an every-down back, and he’s consistent day-in and day-out. Behind those two, things get muddled with Darien Rencher, Kobe Pace and Mikey Dukes. We haven’t seen a lot of either Dukes or Pace, and you get the feeling Dukes’ time to step up is now.

The freshmen are both on campus and bring a different set of skills to the table – Shipley can run routes out wide and out of the backfield and he can carry the ball on early downs. He will tell you that he isn’t a 25-carry-a-game running back, and that’s ok, because in this offense no one is going to get those 25 carries. Mafah packs a powerful punch – I’ve said it before, that he reminds me in so many ways of Alabama running back Najee Harris. He is powerful and built to run over people, but he has that sneaky quickness and speed that allows him to run away from people.

Spiller has a lot of watching to do this spring.

Brandon Rink: Clemson prides itself for getting practice reps down the roster -- particularly in the spring -- but the new position coach here has a welcome challenge in getting a stacked running back group all looks coming up.

The freshmen will certainly draw the media attention -- especially with the No. 1 all-purpose back in that mix (Shipley) -- but I do wonder what’s next for a second-year player such as Pace or third-years like Mellusi and Dukes. Mellusi was featured a little more last year with 27 carries for 151 yards and three touchdowns, while Pace and Dukes combined for just short those of chances (Pace 18-75; Dukes 8-62).

Do Shipley and/or Mafah keep that group down the depth chart or might Travis Etienne’s absence make a wide-open race for the bulk of the carries? That won’t be all settled during the spring but some sort of informal pecking order could lead to at least a minor roster shakeup going into the fall.