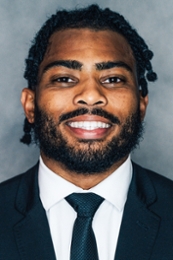 Running Back
B I O
Original walk-on turned team and community leader who enters 2021 having recorded 74 carries for 375 yards and three touchdowns in 150 snaps over 35 career games.

2020: Won the , presented annually to college football’s most inspirational player, coach, team or figure … rushed 24 times for 137 yards with one touchdown and caught two passes for 15 yards in 62 snaps over 12 games … gained 34 yards on seven rushing attempts vs. Wake Forest … rushed four times for 28 yards vs. The Citadel … gained five yards on three carries vs. No. 7 Miami … rushed four times for 11 yards at Georgia Tech … gained 10 yards on two carries vs. Syracuse … gained 15 yards on two catches and rushed twice vs. Pitt … scored on a career-long 50-yard touchdown run at Virginia Tech in his only touch of the game … rushed once in ACC Championship Game vs. No. 2 Notre Dame.

2019: Recorded 26 carries for 135 yards and two touchdowns on the ground plus four catches for 26 yards in 66 snaps over 13 games … gained 22 yards on six carries vs. Georgia Tech … received one carry vs. No. 12 Texas A&M … rushed twice for eight yards at Syracuse … gained six yards on two carries vs. Charlotte … gained 27 yards on three carries vs. Florida State … scored first career touchdown on an eight-yard run at Louisville … recorded a three-yard rush and a 10-yard reception vs. Boston College … recorded 36 yards and a touchdown on three carries on his 22nd birthday vs. Wofford … rushed once for a yard and caught an eight-yard pass at NC State … gained 13 yards on three carries and caught a 12-yard pass vs. Wake Forest … rushed twice for eight yards at South Carolina … gained three yards on a carry vs. No. 22 Virginia in the ACC Championship Game.

2018: Rushed for 65 yards on 15 carries in 22 snaps over seven games … carried twice for 11 yards vs. Furman … recorded two touches (one rush, one reception) vs. No. 16 NC State … rushed twice for 15 yards at Florida State … gained 20 yards on four rushes vs. Louisville … added three yards on two carries vs. Duke … rushed three times for 13 yards against Pitt … gained a yard on one carry vs. No. 3 Notre Dame in the Cotton Bowl.

End of a generation (Personal)