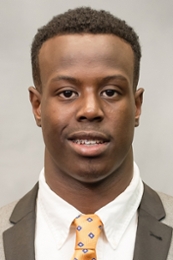 Running Back
B I O
Burst onto the scene as one of the nation’s most explosive running backs in 2017 and followed up with a record-breaking 2018 and 2019 campaigns as a sophomore and junior … entered 2019 bowl season with 493 career carries for 3,924 yards (8.0 avg.) with a school- and ACC-record 54 touchdowns plus 46 career receptions for 433 yards and four receiving touchdowns in 41 career games (28 starts) … entered the bowl season as the ACC career leader in rushing touchdowns (54), total touchdowns (58) and points by a non-kicker (348) … back-to-back ACC Player of the Year in 2018 and 2019 who became the first running back to win the award in consecutive years since Mike Voight in 1975-76 … is the only player in school history with multiple 1,500-yard rushing seasons and is one of only 16 Power Five players since 2000 to reach the 1,500-yard mark in multiple seasons, joining AJ Dillon, Ameer Abdullah, Christian McCaffrey, Dalvin Cook, Darren McFadden, Ezekiel Elliott, Jonathan Taylor, Ka’Deem Carey, Kendall Hunter, Lamar Jackson, LaMichael James, Melvin Gordon, Montee Ball, Ray Rice and Steven Jackson … set single-season school records in 2018 in rushing yards (1,658), yards per carry (8.1), rushing touchdowns (24), total touchdowns (26) and points scored (156) … selected as a Preseason All-American for 2019 by Phil Steele (first-team) and Athlon (second-team).

2019: Maxwell Award semifinalist … Doak Walker Award semifinalist … Walter Camp Player of the Year Semifinalist … second-team All-America selection by all five NCAA-recognized selectors … first-team All-ACC selection … entered bowl season with 1,500 yards on 182 carries (8.2) and 17 rushing touchdowns plus 29 catches for 298 yards and two receiving touchdowns in 465 snaps over 13 games (all starts) … posted a career-high 205 yards and matched his career high with three rushing touchdowns on 12 carries against Georgia Tech … earned Maxwell Award Player of the Week, ACC Running Back of the Week and team offensive player of the week honors for the performance … scored on a 90-yard touchdown run against Georgia Tech, setting a Memorial Stadium record and tying the school record for longest run … rushed 16 times for 53 yards and posted career highs in receptions (four) and receiving yards (52) vs. No. 12 Texas A&M … gained 76 yards on 14 carries and caught three passes for 32 yards at Syracuse … rushed 11 times for 61 yards with a touchdown vs. Charlotte … gained 67 yards on 14 carries including a 13-yard rushing touchdown at North Carolina … recorded 127 rushing yards on 17 carries, a 23-yard pass completion and a three-yard receiving touchdown vs. Florida State, earning ACC Running Back of the Week and sharing team offensive player of the game honors  … eclipsed the 3,000-yard rushing mark for his career against Florida State, becoming the seventh player in school history to reach the milestone … in that game, also became the first Clemson running back to complete a pass since C.J. Spiller on Nov. 14, 2009, at NC State … rushed 14 times for 192 yards with one touchdown to share team offensive player of the game honors at Louisville, marking the 11th time in his career he averaged 10.0 yards per carry in a game on at least five attempts to tie Colin Kaepernick for the most by any FBS player since 2000 … tied career high with three rushing touchdowns among his 16 carries for 109 yards vs. Boston College and also contributed three catches for 33 yards … Recorded a career-high 212 rushing yards on nine carries with two rushing touchdowns vs. Wofford, sharing team offensive player of the game honors … reached 200 rushing yards for the third time in his career in that contest to break the school record for career 200-yard rushing games (two each by Ray Yauger, 1967-69; Terrence Flagler, 1982-86; Raymond Priester, 1994-97; Andre Ellington, 2009-12) … broke James Davis’ school record (47 from 2005-08) for career rushing touchdowns with the two scores against Wofford and also reached the 1,000-yard mark in his ninth game of the season to tie Terrence Flagler’s school record for fewest games needed to reach 1,000 rushing yards (nine in 1986) … rushed 14 times for 112 yards with two rushing touchdowns and caught three passes for 31 yards with a receiving touchdown at NC State to earn ACC Running Back of the Week honors … scored his 50th career rushing touchdown in the contest, joining James Conner and Lamar Jackson as the only players in ACC history to accomplish the feat … earned ACC Running Back of the Week and shared team offensive player of the game honors for his 16-carry, 121-yard, one-touchdown performance vs. Wake Forest, in which he also caught three passes for 37 yards … the performance against Wake Forest was his school-record sixth straight 100-yard rushing game, breaking five-game streaks by Kenny Flowers (1985) and Raymond Priester (1996-97) … broke James Conner’s ACC records for rushing touchdowns (52) and total touchdowns (57) upon rushing for two touchdowns among his 51 yards on 15 carries at South Carolina … rushed 14 times for 114 yards with a rushing touchdown vs. No. 22 Virginia in the ACC Championship Game, tying Wayne Gallman’s school record with his 17th career 100-yard rushing game … rushed for 36 yards on 10 carries with a touchdown and led Clemson with 98 receiving yards and two receiving touchdowns among his three receptions, including the 34-yard game-winner with 1:49 remaining, vs. No. 2 Ohio State in the Fiesta Bowl.

2018: Doak Walker Award finalist … Maxwell Award semifinalist … first-team All-American by ESPN.com and Sporting News … second-team All-American by the AFCA, AP, FWAA and Walter Camp … also garnered second-team All-America status from CBS Sports, College Football News, Sports Illustrated and The Athletic … ACC Player of the Year … ACC Offensive Player of the Year … first-team All-ACC … unanimous first-team AP All-ACC selection that also garnered AP ACC Offensive Player of the Year … Blanchard-Rodgers Trophy recipient as the best collegiate football player in or from South Carolina … produced the most prolific rushing season in school history, producing a school-record 1,658 yards on 204 carries with a school-record 24 rushing touchdowns and 12 catches for 78 yards and two receiving touchdowns in 486 snaps over 15 games (all starts) … tied the ACC record for total touchdowns, as his 26 total touchdowns tied the previous record held by Pitt’s James Conner since 2014 … gained 63 yards on 11 carries with a touchdown run vs. Furman … rushed eight times for 44 yards with a touchdown at Texas A&M … collected a then-career-high 162 rushing yards and matched his then-career-high with two rushing touchdowns vs. Georgia Southern, collecting team offensive player of the week honors … named ACC Running Back of the Week after an 11-carry, 122-yard performance at Georgia Tech that included one rushing touchdown and one receiving touchdown … repeated as ACC Running Back of the Week and added team co-offensive player of the week honors against Syracuse after posting career highs in rushing attempts (27), rushing yards (203) and rushing touchdowns (three) … the 200-yard rushing performance was only the 16th 200-yard rushing game in Clemson history and the first since Andre Ellington’s 228-yard effort against Auburn in the 2012 season opener … rushed 10 times for 167 yards with rushing touchdowns of 59, 3 and 70 yards at Wake Forest, becoming the first Clemson player to post back-to-back three-touchdown games on the ground since Travis Zachery in 1999 … pushed his four-game rushing total to 654 yards, breaking Woodrow Dantzler’s school record for most rushing yards in a four-game span (623 in 2000) … rushed for three touchdowns among his 15 carries for 39 yards vs. No. 16 NC State, becoming the first player in Clemson history and only the fourth ACC player since 2000 to rush for three touchdowns in three consecutive games … gained 45 yards on 10 carries at Florida State … rushed eight times for 153 yards vs. Louisville with one rushing touchdown … gained 78 yards on 11 carries at No. 17 Boston College, surpassing the 1,000-yard milestone on the season to mark only the ninth time in school history that a Clemson player rushed for 1,000 yards in a season in as few as 10 games … rushed nine times for 81 yards with two touchdowns vs. Duke … broke the school record for rushing touchdowns in a single season held previously by Lester Brown, James Davis and Wayne Gallman (17 each) in the midst of a 28-carry, 150-yard, two-touchdown effort vs. South Carolina … collected ACC Championship Game MVP honors against Pitt after rushing 12 times for 156 yards with two touchdowns, including a 75-yard touchdown on the game’s opening play from scrimmage … broke Gallman’s single-season school record on a 62-yard touchdown run in the midst of a 14-carry, 109-yard performance against No. 3 Notre Dame in the Cotton Bowl … tied Clemson bowl record with three total touchdowns (two rushing and one receiving) against No. 1 Alabama in the National Championship Game, finishing the contest with 86 yards on 14 carries and five yards on his touchdown reception.

Before Clemson: Clemson’s last commitment in the class of 2017, he committed on Jan. 26 and signed just six days later … top-125 prospect by ESPN, he ranks No. 114 overall, is the No. 13 running back and No. 4 player in the state of Louisiana … No. 8 prospect in the state by 247 Sports … helped Jennings High to an 11-2 record in 2016 and third round of the state playoffs … had incredible senior year, rushing for 2,459 yards on just 211 attempts, an 11.7 yards per rush figure … had 35 rushing touchdowns and 39 total touchdowns … had two receiving and two on kickoff returns … produced 100-yard games 12 out of 13 contests … that includes six games with at least 200 rushing yards … had at least one touchdown in every game and multiple touchdowns in 10 games … had season-high 18 rushes for 283 yards and three scores against Iota High School … averaged 22 yards per rush and scored five touchdowns against Brusly High in a state playoff game … averaged 40 yards per kickoff return on just six attempts for the year … had 2,799 all-purpose yards as a senior and 39 touchdowns for 222 total points … as a junior, had 2,938 rushing yards over just 11 games, 267 per game … had 42 touchdowns … added five catches for 134 yards, a 27-yard average … had 11 kickoff returns for 342 yards as well … for his career, had 7,518 rushing yards in 42 games, 179 per game … had 103 rushing touchdowns … added 18 receptions for 421 yards for his career … had 22 kickoff returns for 822 yards, a 37-yard average … had 115 total touchdowns and 8,864 total yards … played for Rusty Phelps at Jennings High … three-time all-district three years and All-Parish performer … all-state in 2015 and state AAA MVP in 2015 … first-team All-Southwest Louisiana in 2015 and 2016, first-team All-Louisiana Coaches Association in 2015 and first-team All-USA Today Louisiana in 2015 … his college decision came down to Clemson, LSU, Texas A&M and Tennessee … first Clemson signee from Louisiana since Nick Watkins in 2003 … wore #8 at Jennings in football and #13 in basketball … recruited by Tony Elliott.