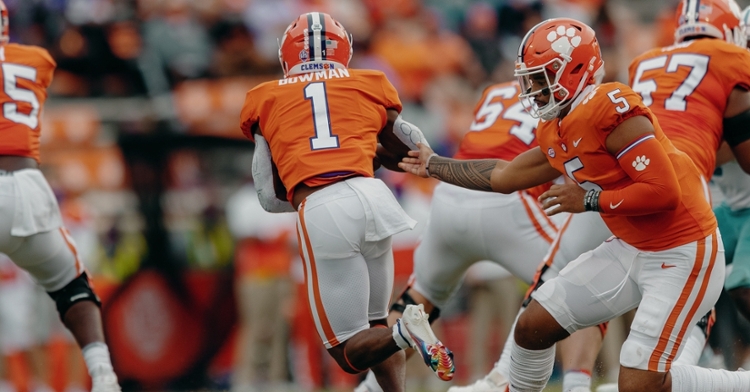 Bowman had seen action in both games this season. (Photo per the ACC)

One of the main reasons Demarkcus Bowman chose Clemson was his grandfather. His grandfather’s recent passing, however, meant Bowman no longer felt comfortable in Tiger Town.

The former 5-star prospect entered the NCAA’s transfer portal Thursday, a shock to many in the program who had high hopes that the speedster would revive thoughts of Clemson great CJ Spiller.

However, Bowman informed Clemson's coaches of his transfer intentions this week.

“The only reason I came to Clemson is so my mother’s dad could watch me play,” Bowman told TigerNet. “He stayed in Atlanta, but he passed away and that really hurt me. He was my closest family to me up there and I just didn’t feel comfortable anymore. I just want to go to a school closer to home.”

A month later, Bowman's grandfather on his father's side also passed away.

"I started to feel uncomfortable," Bowman said. "It was uncomfortable being so far from home. So I really just wanted to be closer to home."

As for Clemson, Bowman wanted to thank the Tigers for everything.

"Clemson is a very great program," Bowman told TigerNet. "They have very great coaches and academic and is literally the most perfect place. It was just not the fit for me, though."

Florida is likely the leader for Bowman’s services and might be able to play as soon as next season. The Gators heavily pursued Bowman and many thought Florida was the leader until Bowman committed to Clemson in May of 2019. Lakeland is just two hours from Gainesville.

Bowman totaled nine carries for 32 yards in the first two games of the season. He was rated as high as the No. 2 running back in the 2020 class out of Lakeland High School (Fla.).

He rushed for 5,081 yards, including an 11.4-yard per-carry average and 71 touchdowns during his HS career.

For this season and beyond, Travis Etienne is a senior and expected to go pro in 2021, with a waiver also available if wanted to current junior Lyn-J Dixon, sophomores Michel Dukes and Chez Mellusi, freshman Kobe Pace and redshirt senior Darien Rencher. Grayson (Ga.)'s Phil Mafah and Weddington (NC)'s Will Shipley are committed for the 2021 class at RB.

“He’s special. He’s another version of Spiller,” Swinney said. “That’s pretty high praise. He’s a long way from that, but as far as just high school tape and explosiveness and track speed – legit track speed – the ability to catch the football… Every time he touches it, he literally can go the distance. Can return (on special teams) and those types of things. I think there’s a lot of similarities between the two coming out of high school. He’s a little thicker probably than C.J. was, but he’s got that type of explosiveness, and it’s easy to see coming out of the system that he’s been playing in.”