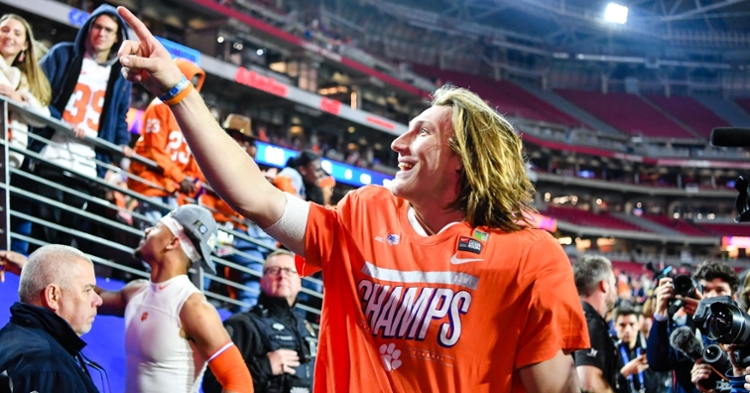 Dabo Swinney’s Tigers rallied twice and held on at the end in a thriller of a win over No. 2 Ohio State.

TigerNet tackles game No. 14 for the Tigers with the key takeaways and game grades.

What we know about Clemson football (game-week 14)

* A lot has been made about the no calls, missed calls and bad calls, but at some point, you have to take the game out of the officials’ hands and just finish.

Ohio State settled for three field goals, whereas Clemson manufactured drives when it mattered most and put the ball in the endzone, whether it was Trevor Lawrence making big plays with his legs or finding Travis Etienne in the passing game.

On defense, Clemson finished drives. Ohio State running back K.J. Dobbins broke free, but the defense stood tall in the red zone and held the Buckeyes to three instead of seven, which ultimately was the difference in the game.

Nolan Turner finished the game with an interception after Ohio State seemingly drove the length of the field with ease.

It’s all about how you finish, and Clemson will have one more chance to finish the season on top of the college football world. -- Nikki Hood

* In our pregame Q&A with an Ohio State site, it was pointed out that this version of the Buckeyes was “substantially better” in the passing game than the 2016 team that Clemson shut out. Against the nation’s top-rated passing defense coming in, Fields became the first opponent QB to top 300 yards passing to complement Dobbins’ big day rushing (18 carries for 174 yards).

What we found out about this Clemson defense is that they could maintain aggressiveness against a prolific attack (9 TFLs/4 sacks) and still bend-not-break from a scoring perspective. This Tanner Muse tackle was one example of recovering on a big play to prevent a TD:

May not have been a "highlight" but you win championships because of plays like this...

Tanner Muse hustles and runs down J.K. Dobbins to prevent a touchdown and then the Tigers D holds OSU to a field goal.

Brent Venables’ group improved to a 35.7 TD percentage allowed in the red zone thanks to two field goals and a lone TD given up in three Buckeyes’ tries.

In a battle of heavyweights, Clemson continued take care of the ball -- and forced two turnovers in key moments with Ohio State pressing toward the goal line. Clemson is now plus-13 in turnover margin over the last 31 quarters, without a non-garbage time turnover surrendered in that span.

Swinney emphasized pregame the importance of ending drives with kicks and that’s just what he got (plus one two-point conversion), with the bonus of a career night for punter Will Spiers. Spiers landed five of his seven attempts inside the 20 and launched three over 50 yards.

On offense, Lawrence was a warrior and played a role in nine of Clemson’s 10 chunk plays (pass of 15+ yards; run of 10+). And the leap Travis Etienne has made in the receiving game was critical to Clemson coming out on top with a game-leading 98 yards and two touchdowns receiving.

This was the test that showed the mettle of the 2019-20 Tigers -- and they will have to put together one more mega-effort to top college football for a second-straight season. -- Brandon Rink

* Muse hasn’t received enough credit for his tackle on Dobbins. Dobbins broke into the clear and appeared to be racing towards another touchdown when Muse, who started 10 yards behind Dobbins, covered enough ground to trip up Dobbins inside the 10. It saved a touchdown and was one of the biggest plays of the night. If Ohio State scores a touchdown there, the game could have gone in a different direction.

It was a night of slow starts. The Tigers missed an early field goal. The offense didn’t score until late in the first half. The defense was on its heels early. Ohio State came out as the aggressor and punched the Tigers in the mouth, but it wasn’t a knockout punch. The Tigers wobbled, they staggered, but they never went down and outscored the Buckeyes 29-7 after falling down 16-0.

There were a lot of big plays – the catch by Amari Rodgers, Trevor Lawrence running wild, the interception by Nolan Turner – but the play by Muse showed the kind of heart and determination it would take to make that comeback. -- David Hood

Swinney gave his team a B-minus overall grade for the win in the aftermath despite the level of competition faced. On offense, Clemson did protect the ball well but struggled to move it with any consistency -- even after the back-to-back scoring drives in the first half. Lawrence and Etienne were the stars in breaking through in accounting for 402 of Clemson’s 417 yards and all four touchdowns.

How many running backs could be closed in by four defenders near the sideline, two yards behind the line of scrimmage and still somehow get through to the endzone?

Well, we know one: Travis Etienne.

Clemson’s defense was on its heels early but the red zone success could very well have been the difference in the game. Venables’ group had averaged two plays of 20-plus yards surrendered per contest -- and allowed seven to the Buckeyes, with the third and fourth plays allowed of 60-plus yards to Dobbins. Clemson performed in the clutch against its toughest test yet as a great warmup for the challenge ahead in New Orleans.

Spiers’ big night is already noted above and this was another game where the opponent did not have a single return on a punt or kickoff. Obviously the storyline of the season has been inconsistent placekicking and the early field goal went off the mark from BT Potter. If Ohio State did contain that last Clemson drive in FG range, it would have been interesting to see if Swinney would have brought him back out for the potential game-winner.