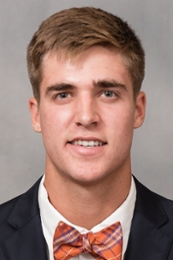 Punter
B I O

Before Clemson: Lettered at Calhoun Academy as a quarterback and punter.

Personal: Son of former two-sport athlete and Clemson Hall of Famer Bill Spiers, who was starting punter in 1986; Bill returned to Clemson to receive his degree and is the senior special teams assistant with the Tiger football team … majoring in construction sciences and management … three-time ACC Honor Roll selection … born Oct. 24, 1997.

Recent Stories on Will Spiers