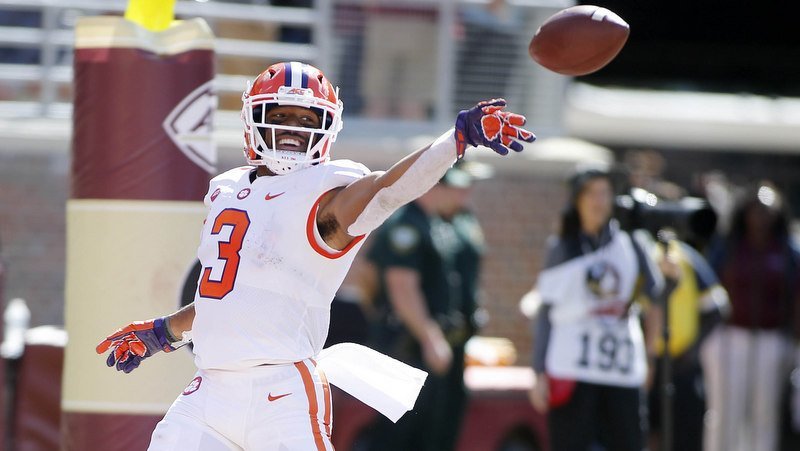 The initial College Football Playoff rankings will debut Tuesday and Clemson figures to be among the top four teams. For Clemson head coach Dabo Swinney and the rest of the Tigers, they will look at the rankings but it’s really business as usual for a program that is used to the national stage.

Clemson defeated Florida St. 59-10 over the weekend in Tallahassee – the worst home loss in Seminole history – and plays host to a woeful Louisville team this weekend at noon in Death Valley. In between will be the rankings show.

"We don't live in a tunnel. We'll pay attention to it. But it’s not like it will be a shock to us. We're not having some viewing party,” Swinney said on his Sunday night teleconference. “I don't have a DVR set. I'm sure it'll be on one of those televisions in the dining hall. It just doesn't matter as Y’all have heard me say a million times unless they're going to cancel the rest of the season. We just have so much work to do. We have four more games that we know of and we're trying to earn a 13th game. All of those games will count. There is no victory at bargain rates. It's great for college football and conversation and speculation in the media. That's all fun, but for us it really does not matter. The only thing that matters is how we play against Louisville."

Swinney said he feels like this is his most complete team.

“I said that coming in. This is the most complete team on paper,” he said. “We've had some really good teams. That 2015 team might have been more talented than the team that won it in 2016 but we didn't get it done. I thought this was my deepest team, most experienced team across the board. We had the most functional players we've had to start the season. But again, you have to go earn it."

On the win over FSU

“We are obviously proud of our team for a great, great win yesterday. We played with great focus, discipline and passion. It was a lot of fun. It was a game I will never forget. It was an historic game for our seniors and our program. That was a pretty special locker room to be in. Just proud of our team. All 72 guys got an opportunity to be a part of it.

"Offensively I thought that we got our running game going in the second half. Travis Etienne ended up with an efficient day. He missed a few runs where he has to be more disciplined with his tracks. Lot of big plays. Trevor Lawrence was outstanding. We only had six negative yards in the game. No sacks.

Chase Brice came in and played well again. I'm pleased with his development, confidence and decision-making. We're doing a good job with ball security. We were really good in the red zone. Gage Cervenka

was outstanding. He was a huge bright spot for us. He has not started at center. Just so pleased with the job that he did leading there.

“Jackson Carman took a step forward for us. Our receivers were great. We had 150 yards after the catch. Still, some things we need to work on. Our quarterback got hit too many times. We had some careless penalties, too. We dropped a couple of balls, but overall a great day. Defensively we held them to -21 yards rushing. We had 14 tackles for loss. We did a good job on third down. Our backups went in and gave up 10 points. We dropped an interception, had a pass interference and gave up a touchdown. Our special teams made a huge impact on the game. We were very concerned about their punt returner, and he had negative three yards. We had some big plays on punt return.

“B.T. Potter got his first field goal. So a lot of good things. "We want to continue to improve, get better and finish strong.”

“Health-wise, Matt Bockhorst got banged up with a sore ankle. But outside of that we're in a pretty good spot right now. Hopefully we'll get Justin Falcinelli back at the first of the week."

On playing so many players

“I just think it creates a sense of urgency everyday. It creates an edge in your program. I knew we were going to have incredible competition at every position. It has worked out that way. I knew we were going to have a lot of guys that we could trust. You look at morale, investment, engagement, attention to detail in practice and guys knowing that they need to be ready to play, that's huge. We've established a lot of trust. The guys who have played have earned it. They have not only played but have played well. This is a team that has really good depth.

"We lost a starting center and Gage played a lot, so he was ready to go. So we don't panic when we have an injury. It's just something we believe in. This particular year has been different because of the experience we've had coming back. Backups know they have to be detailed just like starters because they're going to play. In three of our four road trips, we've played our entire travel roster. We won't hurt the team, but we have a lot of guys who can play."

Will Spiers and the punting competition

“It's open every day at practice. Will continues to be our best option. He was disappointed he missed that one. He came back and had a good day. We have a lot of confidence in him. It's open every day, though. It's never closed. Everyone has an opportunity. Right now, Will is still our best guy."