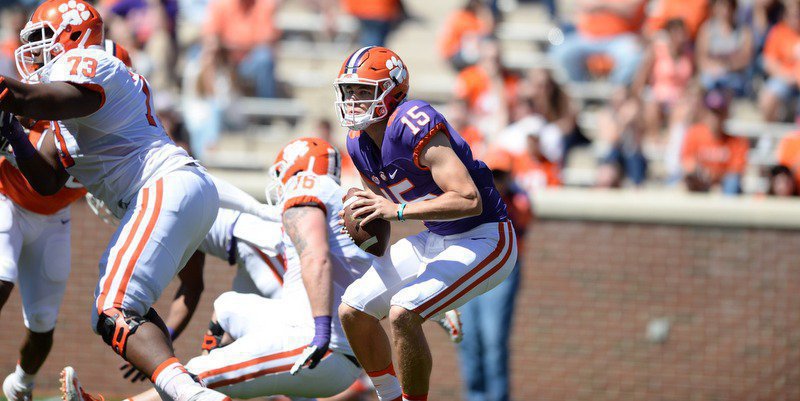 CLEMSON – A record 60,000 fans showed up in Death Valley for Clemson’s annual Orange and White Game, and they weren’t disappointed on a sun-splashed early spring afternoon.

The Orange jumped out to a 13-0 first half lead and held on to defeat the White 19-14 as the team celebrated with last year’s seniors, who received their National Championship rings at halftime.

Some quick observations from the press box:

*Let’s start with the quarterbacks. With the offensive line split into two fairly equal groups, none of the quarterbacks had a lot of time to sit in the pocket, scan the field, and make long downfield throws. With that said, Hunter Johnson, Kelly Bryant, Tucker Israel, and Zerrick Cooper all had skittish moments.

Bryant looked fantastic running the football, as we knew he would, and wound up with nine carries for 47 yards. However, he tore a tendon in his pinkie finger early in the game and it might have affected his passing.

Israel looked solid – he led one nice scoring drive – and didn’t mind taking a shot while throwing into traffic to complete a pass.

Johnson had maybe the best throw of the day when he connected with wide receiver Diondre Overton on a 24-yard touchdown in the second quarter. His over-the-shoulder throw to Overton was on the money.

Cooper had his moments where the arm talent was on display – he threw a corner route in the second quarter that had plenty of zip – but there were a few other throws under duress that he would likely want back. I thought Cooper actually looked better once his nerves calmed down, and he led a fourth quarter scoring drive that showcased his talents. A 24-yard strike to Cornell Powell set up a three-yard run by Choice. 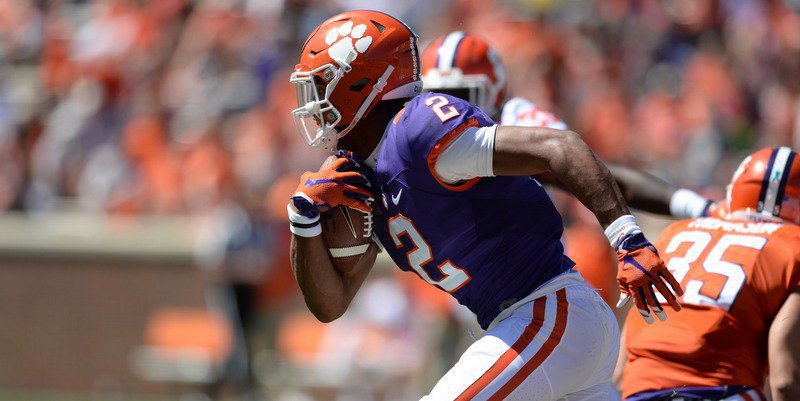 Judging from what the coaches have been saying, it was a three-man race at quarterback. But Saturday showed Israel will still have a say in the proceedings.

*Out of the running backs, C.J. Fuller and Tavien Feaster each had decent days, and Feaster looked good in the return game. The thing with Fuller – he’s never gonna just absolutely wow you with a move, but he’s consistent and covers the football and just churns out yards. I was impressed with his pass blocking as well.

Feaster always looks like he’s a step away from breaking one.

*Replacing center Jay Guillermo will be difficult from a leadership standpoint, but both teams had isssues with snaps Saturday.

*I wish the quarterbacks would have had more time, but there were very few opportunities for the tight ends to catch the ball. Cannon Smith had an early 11-yarder, and Shadell Bell caught one late.

*Go ahead, pick a defensive player. Most of the linemen looked like they are ready for the season, but that’s to be expected at this point in the spring. They know what’s coming from the offense most of the time, and they have the advantage.

But…Clemson’s defense will be absolutely nasty this season. We didn’t hear a lot from linebacker Shaq Smith this spring, but he was all over the field Saturday and made several nice tackles. On one play, I saw him bite on the run but use his speed to dip back into coverage.

Defensive coordinator Brent Venables has a lot of studs to work with.

*Wide receiver Deon Cain dropped a few balls, which was disappointing after he’s had a solid spring. In fact, there were lots of drops across the receiving corps, but I was impressed with Overton and the toughness shown by Ray-Ray McCloud. McCloud had a late kickoff return that drew cheers from the crowd.

Cornell Powell and T.J. Chase each flashed some of their potential late in the game,

*Cornerback Trayvon Mullen stuck his nose in on a few tough tackles, but he also had a couple of pass breakups that caught my eye. He’s gonna be a good one.

*Punter Will Spiers had an early 59-yard punt, but the rest of the day was a mixed bag for all of the punters involved. I really don’t remember a high, booming kick that would allow the coverage to get down the field.

We will hav e plenty of final stats and more observations after interviews.