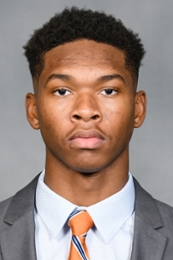 Wide Receiver
B I O
Overall: Will play in the Under Armour All-America Game in Orlando, Fla., on Jan. 2, 2020 … consensus national top-125 player who will contribute to Clemson’s outstanding wide receiver tradition … comes to Clemson from same school as current Tigers receiver Justyn Ross and safety Ray Thornton III … MVP for the Alabama team in the Alabama-Mississippi All-Star game on Dec. 14, posting six catches for 98 receiving yards in the game … participated in The Opening in Frisco, Texas in the summer of 2019.


In High School: Played for Jamey DuBose at Central High School in Phenix City, Ala. … had 44 receptions for 739 yards and 11 touchdowns as a senior … helped team to a 12-2 overall record, including 6-0 in the region … first-team all-region, All-OA News, All-Bi-City as a junior and senior … had 40 receptions for 668 yards and eight touchdowns as a junior … over his last two years, recorded 84 catches for 1,407 yards and 19 touchdowns … averaged 16.8 yards per catch and a touchdown every 4.4 receptions in that span.