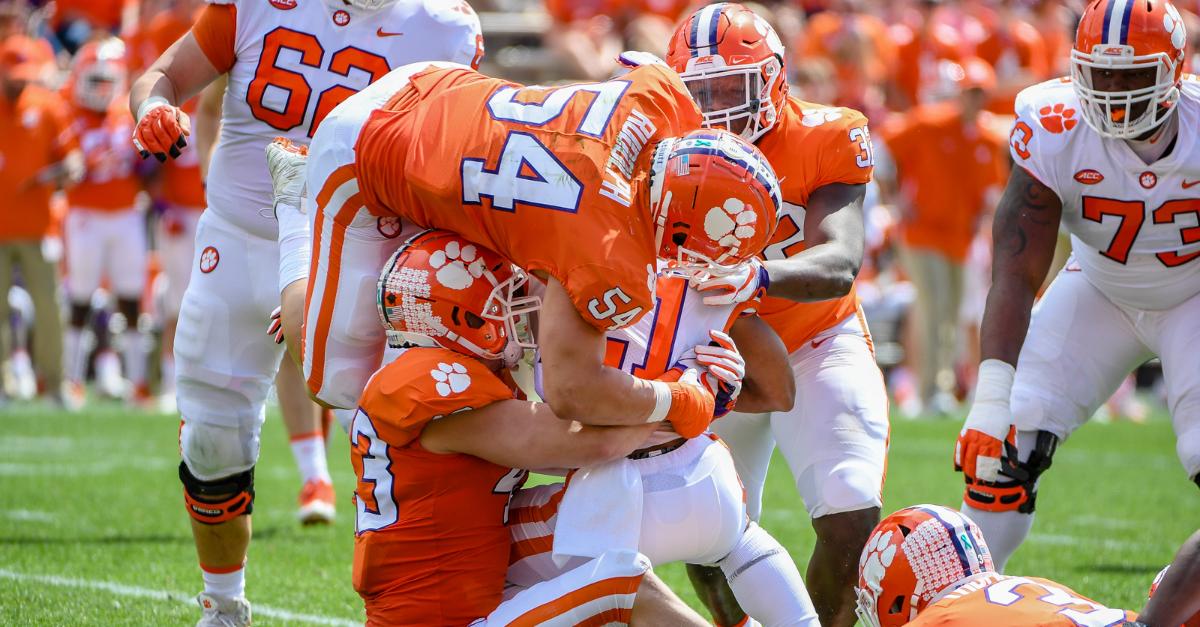 Logan Rudolph plays with abandon and could become a fan favorite

It’s the most wonderful time of the year.

No, there are no Christmas trees for sale, and hopefully, no one has their Christmas lights up (except for that one crazy aunt who starts decorating July 4th). There’s no snow around here, but anybody who loves college football understands that we are about to get this thing started and we couldn’t be happier.

The Tigers have this weekend off and will have a few final days of August camp before beginning game prep next week.

We’ve gathered a lot of information over the last few weeks – much of it by simply listening to those in the know – and have decided to post some of that in our first edition of the Locker Room Report.

I will start with team leaders – a significant concern centers on who will replace the voices of Clelin Ferrell and Christian Wilkins and Kendall Joseph and guys like that. As camp comes to a close we’ve got a little more clarity on who those leaders are.

On offense, guys like Trevor Lawrence and Travis Etienne are the ones everybody will look to, but senior offensive linemen Tremayne Anchrum, Gage Cervenka, Sean Pollard, and John Simpson will be the heartbeat on that side of the ball.

Cervenka told us a few weeks ago that he is doing what he can to make the defensive line better by beating the crap out of them every day. He said he doesn’t have to say a lot – he answers questions if they have them – but he goes out with the intention of beating them up every chance he gets. Each of those guys have had to step up their game – even in practice – and it’s beginning to pay off.

It’s the defense, however, where the leadership will be needed and several players are stepping to the forefront.

It’s no secret that defensive coordinator Brent Venables loves defensive end Logan Rudolph – he smiles every time he mentions Rudolph’s name – and Rudolph is one of those players who has stepped to the forefront. Freshman KJ Henry is another name we’ve heard, along with K’Von Wallace, AJ Terrell, James Skalski, and Isaiah Simmons.

Leadership shouldn’t be a problem – these guys just need to grow up.

*Speaking of the defensive line – Tyler Davis is going after somebody’s job at defensive tackle. He has taken a lot of snaps with the first team in August, and the coaches have raved about his work ethic. The players mention his name every time we ask about who on the defensive line is impressing, and it wouldn’t surprise anyone to see Davis run out there as a starter against Georgia Tech.

*Last year’s senior class put up some numbers that might never be broken, including a 55-4 record over their four years, with two National Championships. That 55-4 record tied Alabama’s senior class for the most wins in college football history for one class.

We all know that head coach Dabo Swinney is the master of motivation, and even though he will never admit it publicly, he has to be taking note of all the noise and excuses coming from all over the country about the Tigers’ 15-0 record and beatdown of Alabama last season.

This year’s senior class has a chance to break that record and maybe quiet some of that noise. Another 15-0 record – which is hard to do – would make this senior class 56-3 over the four years and if they finish 15-0, would mean a third National Championship.

It also means that as good as last year’s class was – and they were all-time great – this year’s batch of seniors can surpass that. Trust me – everybody in that building knows it. I was told that there has been an intensity in camp the last week or so that is reminiscent of the run to the College Football Playoff last season, especially late in the year.

There is motivation aplenty.

*Tight end Jaelyn Lay has stepped up his play over the last week or so and now looks like the kind of guy that can be a contributor this season. I was talking to a former player this week and we were musing about how much fun this offense can be if Lay becomes a threat.

If you play the Tigers straight up, you have Diondre Overton in the slot and Lay either tight or in the slot and Tee Higgins and Justyn Ross on the outside. Who you gonna cover? Play nickel or dime? Great, Etienne will eat that alive behind the offensive line. Play them straight up and leave a linebacker on Overton, or maybe a safety?

That opener against Tech is going to be fun to watch – to see who plays where on defense and to see this offense in action.