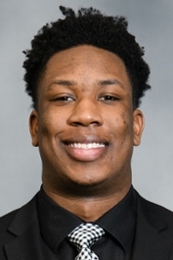 Defensive End
B I O
Enters 2022 having registered 88 career tackles (19.0 for loss), 10.0 sacks, five pass breakups, three fumble recoveries and one forced fumble in 1,112 snaps over 44 career games (10 starts).
2021:Put together a career year with a strong finish, ending credited with 28 tackles (6.5 for loss), 4.5 sacks, a forced fumble and a fumble recovery in 339 snaps over 13 games (four starts) … All-ACC Academic Team selection … made one tackle vs. No. 5 Georgia … added two stops vs. SC State … credited with two tackles and a half-sack vs. Georgia Tech … added a tackle for loss at NC State … recorded two tackles and a game-clinching fumble recovery vs. Boston College … made three tackles at No. 23 Pitt … added three tackles (0.5 for loss) and a half-sack in his first start of the season vs. Florida State … had a tackle for loss among his three stops at Louisville … added two tackles with a sack vs. UConn … contributed a half-sack among his four tackles vs. No. 13 Wake Forest … recorded a sack and his first career forced fumble among his two tackles at South Carolina … had three tackles including a key sack late in a bowl win against Iowa State, finishing the year with at least half a sack in each of the team’s last four contests.
2020:Credited with 29 tackles (6.0 for loss), 3.5 sacks, two pass breakups and a fumble recovery in 384 snaps over 12 games (six starts) …made his first career start and recorded five tackles (three solo) including a nine-yard sack in his hometown at Wake Forest … added two tackles vs. The Citadel … split a sack amongst his four tackles (two solo) vs. Virginia … made one tackle (for loss) and batted down a pass vs. No. 7 Miami … contributed two tackles and a fumble recovery at Georgia Tech … recorded two tackles and a pass breakup vs. Syracuse … played 26 snaps in Clemson’s 18-point comeback win vs. Boston College … registered a seven-yard sack among his five tackles at No. 4 Notre Dame … posted two tackles (1.5 for loss) at Virginia Tech … added four tackles and a sack in ACC Championship Game vs. No. 2 Notre Dame … made two tackles vs. No. 3 Ohio State prior to exiting Sugar Bowl with an injury.
2019: Credited with 22 tackles (4.5 for loss), two sacks and three pass breakups in 350 snaps in 15 games … recorded two tackles including a sack vs. Georgia Tech … posted a tackle vs. No. 12 Texas A&M … added a tackle, a half-sack and a pass breakup at Syracuse … made one tackle and broke up two passes vs. Charlotte … contributed one tackle at North Carolina and vs. Florida State … added two tackles at Louisville … posted three tackles including a half-sack vs. Boston College … recorded two tackles including one for loss vs. Wofford … made three tackles at NC State … shared a tackle for loss vs. Wake Forest … added two tackles vs. No. 22 Virginia in ACC Championship Game … posted two tackles (0.5 for loss) vs. No. 1 LSU.
2018:Played 39 snaps in four games while redshirting and was credited with nine tackles (2.0 for loss) and a fumble recovery in that time … made debut with one tackle and a fumble recovery in 13 snaps vs. Furman … registered a career-high five tackles, including two for loss, playing near his hometown at Wake Forest.
Before Clemson: No. 6 player in the nation by ESPN, No. 14 by 247Sports, No. 26 by Rivals and No. 27 by PrepStars … No. 3 defensive end in the nation by 247Sports, ESPN and Rivals … No. 2 player in North Carolina by Rivals … second-team All-American by USA Today … played in Under Armour All-American Game … scored 1,156 points in 115 career basketball games … averaged 16 points and seven rebounds per game as a junior … coached by Adrian Snow at West Forsyth High School … recruited by Todd Bates and Mike Reed … enrolled at Clemson in January 2018.
Personal: Born Jan. 27, 1999 … earned degree in sports communication in December 2020 in only three years… added a master’s degree in athletic leadership in December 2021 … completed a microinternship with Bunty in 2018 … two-time ACC Honor Roll selection (2019-20) … won 2021 P.A.W. Journey P.A.T. Man of the Year award.
Note: Tackle stats in the bio above reflect statistics from coaches film review. Tackle stats in the table below reflect those as awarded by gameday stat crews.