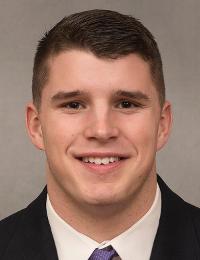 Defensive End
B I O
Entered 2019 bowl season credited with 38 career tackles (7.0 for loss), a sack, a pass breakup and a fumble recovery he returned 39 yards for a touchdown in 498 snaps over 29 career games (eight starts).

2018: Credited with 13 tackles (1.0 for loss) in 141 snaps over 14 games … posted one tackle each in the Furman, Georgia Southern and Syracuse games … made two tackles at Georgia Tech … contributed two tackles (one for loss) at Wake Forest … added two tackles vs. No. 16 NC State … made a tackle vs. Duke … recorded a season-high four tackles against Pitt.

Before Clemson: A top-200 prospect nationally according to Scout, which rated him No. 197 overall, seventh-best in the state of South Carolina and No. 14 in the nation at his position … No. 4 player in the state and No. 22 at his position by 247 Sports … No. 8 prospect in the state by ESPN … No. 7 in the state by Rivals … played just two games in 2016, he suffered a torn labrum in the second game of the year for Northwestern High School and was lost for the season … had 11 tackles over the first two games as a starting defensive end … in 2015 as a junior, helped Northwestern to a 14-1 record and state championship appearance … had 60 tackles, including 24.5 for loss, 14.5 of which were sacks … also had an interception, four caused fumbles and three fumble recoveries … had four sacks against South Pointe and Nation Ford, his top two games of the year … played for Kyle Richardson his first three years, Richardson is now a defensive analyst at Clemson … as a junior on offense, he had eight catches for 110 yards and a score … as a sophomore in 2014, had 20 receptions for 224 yards and a score … as a freshman in 2013, had 22 catches for 168 yards and a score … scored a touchdown in first career game as a freshman against South Aiken … finished career with 50 catches for 502 yards and three scores … committed to Clemson through a video while he was chopping wood on May 6, 2016 … wore #4 at Northwestern … played for David Pierce as a senior … recruited by Jeff Scott and Brent Venables.

Personal: His brother, Mason, was the starting quarterback at Oklahoma State … majoring in communication … born April 14, 1998.