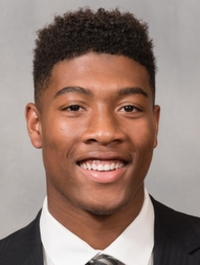 Linebacker
B I O
Athletic defender who transitioned from safety in 2017 to the starting nickel/sam linebacker position in 2018 and was eventually named the Butkus Award winner as the nation’s top linebacker in 2019 in only his second year at the position … enters 2019 bowl season credited with 239 tackles (26.5 for loss), 9.5 sacks, 19 pass breakups, three interceptions (including one returned for a touchdown), five forced fumbles and a fumble recovery in 1,683 career snaps over 42 games (27 starts) … selected as a Preseason All-American for 2019 by Phil Steele (first-team) and Athlon (second-team).

2016: Redshirted … participated in the long jump with the Clemson track & field team in the spring.

Before Clemson: First-team all-state on both sides of the ball … first-team all-state as a defensive back, but he had some great stats on offense as well … had 92 tackles on defense and had 29 receptions for 994 yards and 13 touchdowns, an average of 34.3 yards per reception … 2015 was his first year as a wide receiver on offense … had a long touchdown catch of 82 yards … had 23 rushes for 148 yards and two scores … also had a 98-yard kickoff return for a score, his only return of the year, and a fumble return for a score … finished with 17 total touchdowns as a senior … helped his team to a 10-2 record in 2015 … coached by Chris McCartney … also outstanding in track, he was state champion in the long jump each in 2014 and 2015 with a career best of 23-8 … chose Clemson over offers from Michigan, Nebraska, Missouri and Louisville … recruited by Brent Venables.