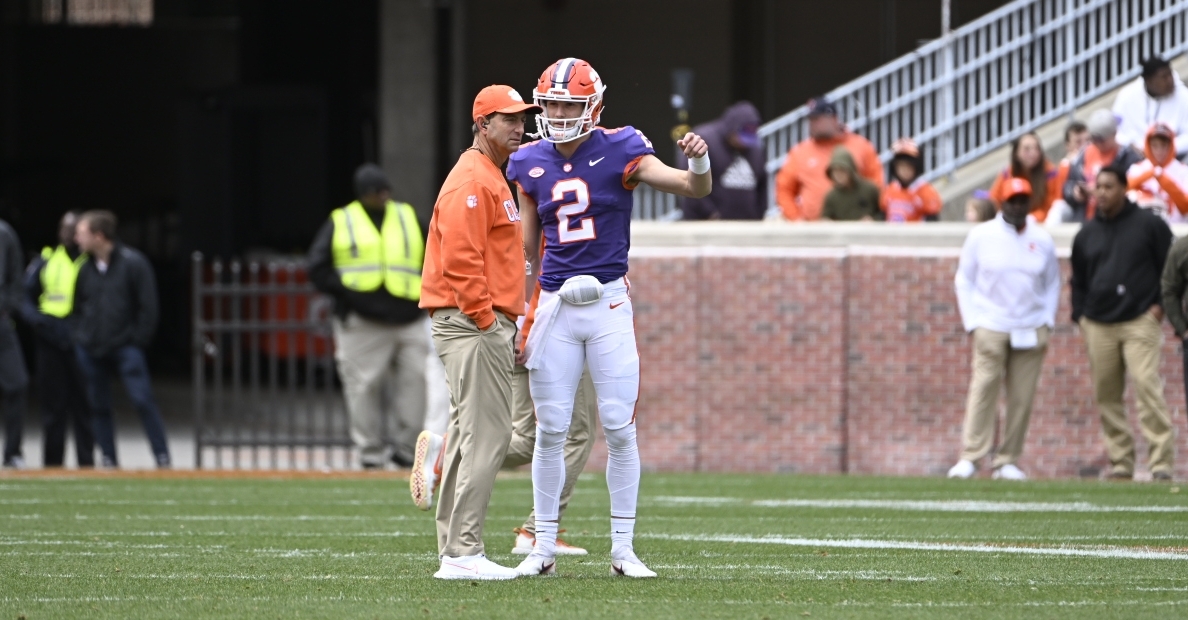 Klubnik and Swinney discuss a play during the spring game.

CLEMSON – Spring practice ended on an April Saturday with temperatures more closely resembling December, and now everyone is looking forward to September.

Clemson held its annual Orange and White Game in Death Valley Saturday afternoon, and the temperature at kickoff was 46 degrees with a “real feel” of 35 degrees. For most of the game, both offenses were in a deep freeze with both defenses dominating. The next time we see the Tigers? It’s 149 days until the season opener against Georgia Tech in Atlanta on Sept. 3rd and 154 days until the home opener against Furman on Sept. 10th.

What did we learn from the spring game?

*The defense is going to be nasty, especially that defensive line. We saw KJ Henry take a big step forward in the last half of the 2021 season and that has continued this spring. Combine his emergence with Xavier Thomas, Myles Murphy, Tyler Davis, Bryan Bresee (who didn’t play Saturday) and the others, and this might be the best defensive line in the country. The cobbled-together offensive lines really didn’t stand a chance.

*It’s hard to compare the quarterbacks in the run game because they are simply touched “down” and can’t really use their legs to escape the pocket. But freshman Cade Klubnik showed on one second-quarter run that he has some wheels, running for 14 yards on a fourth-down play. If Uiagalelei holds onto the starting job, my guess is there will be packages for Klubnik because of the athleticism he brings to the offense.

Both offensive lines were overwhelmed at times, and with so many of the starting receivers on the shelf, it looked like 2021 all over. But Uiagalelei had some nice throws and Klubnik showed he has touch and accuracy. It was simply a case that neither quarterback had time to sit back in the pocket. However, Uiagalelei had a pretty throw to Joseph Ngata down the sideline, and then another that would have been a touchdown but wasn’t allowed because of the sack rule. Klubnik had a nice throw on the run to Hamp Greene to the sidelines late in the second quarter.

However, Swinney spent a lot of time challenging Klubnik, not only on his play but his leadership.

*We got a glimpse of how Wes Goodwin wants to use some of the players on the defense, with Trenton Simpson moving between the WILL (weakside linebacker) and Nickel/SAM spots, depending on down and distance. Barrett Carter also played Nickel/SAM (he was on the White squad) and even played Dime on one play. Using those bigger players – who also have speed – reminds me of Brent Venables using Isaiah Simmons all over the field. Imagine Andrew Mukuba playing the Dime, Carter at Nickel (or Jeremiah Trotter), and Simpson at WILL. Speed everywhere.

*We really haven’t gotten a chance to see Goodwin as a “coach” and see his sideline demeanor. However, midway through the first half, defensive tackle Payton Page jumped offsides and Goodwin jumped off the sideline to take Page out of the game. He met Page near the numbers and made his thoughts known.

*Head coach Dabo Swinney said if he had one question mark this spring, it was at the punter spot. BT Potter had one booming punt, but he also dropped a snap, as did Aidan Swanson. There’s a lot of work to do at that spot before we get to September. Both dropped snaps led to the only points of the first half for both teams.

*Again, it's hard to really get a feel for the secondary because of who they were covering and because of the fact that they didn't have to cover very long. But I liked what I saw out of the back end on both teams, including freshman Toriano Pride.

*Wide receiver Dacari Collins left in the third quarter after an injury. He was walking off the field holding his left shoulder.