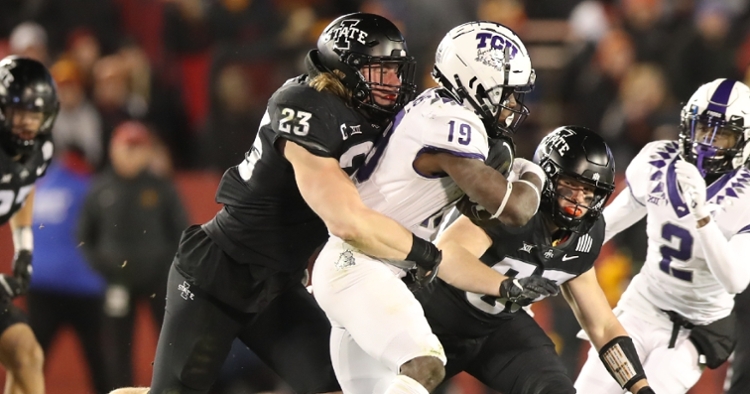 ORLANDO – Clemson’s offense and new offensive coordinator Brandon Streeter will face one of college football’s more unique defenses when they play Iowa State next Wednesday, a defense that has given teams fits for years. But it’s also a defense the Tigers have seen before.

The Cheez-It Bowl matchup with Iowa State will feature two of the nation’s top defenses. Entering bowl selection, Clemson ranked No. 9 in the nation in total defense, allowing only 308.4 yards per game. Iowa State was right behind Clemson at No. 10 with an average of 309.2 yards allowed per game.

Iowa State defensive coordinator Jon Heacock employs a defense that has many names but the most common in football circles is the 3-High 30 Stack (it’s also called a 3-5-3). Heacock was looking for a way to stop the high-scoring offenses of the Big 12 and found a gem with it. The difference between the 3-High 30 Stack and a regular 3-3-5 is that Stack employs three high safeties.

It’s a 3-3-5 that puts three defensive linemen, three linebackers and five defensive backs in the lineup. In this alignment Iowa State’s third safety serves as a "robber" of sorts, a defender that can hunt in the middle of the field or act as an extra middle linebacker when called upon.

Heacock told TigerNet Sunday that his players are the key to the defense.

“I think, first and foremost, they are the secret sauce, the 3-3-5, 3-5-3, three-high safeties, whatever you want to call it, has gotten a lot of notoriety. The secret sauce is those guys that bought into how we play defense and not so much what we were playing,” Heacock said. “As we got into it, defense was not something that was maybe a high priority in our conference. Everybody was scoring points or you didn't think you could play defense. I think our kids, our players, took that to heart and bought into the how stuff. And they meant everything to what we have been doing on defense. They have been the secret sauce.

“Again, I think a lot of it gets put on what we do. I think the reality of it is how our guys have done it has been what's really been remarkable for me. I've done this for a long time, and they have been as impressive a group as I've ever been around.”

The defense turned heads and Clemson was one of 30 schools that made the trip to Ames, Iowa, a few years ago to learn more. Venables used it with a lot of success with former safety Isaiah Simmons, moving Simmons all over the field in the robber role.

Streeter said the defense is able to disguise coverages and works because of the veterans on the Cyclones side of the ball.

“Yeah, first off, it's a great defense. It's that three-safety defense that they do a lot of things. They do a lot of disguising, and they play very, very well together. They have got a veteran group of guys on the defensive side of the ball, and they obviously know what they are doing,” Streeter said. “So, first and foremost, they are a really good defense, and they have got the veteran players that have the experience.

“So, they complement each other, and it's very obvious they play hard. They do a really good job at tackling and getting guys on the ground. So it's going to be a good challenge for our guys. Now, this defense is somewhat of a newer defense. A couple years ago, maybe four or five years ago, is when I know our defensive staff actually clicked with them, and we put in some things that they taught us.”

“It was a situation where those guys came up and visited with Brent [Venables] and the staff and looked at what we were doing. I think all staffs do that. I think really good staffs do that, try to get some stuff that they can use,” Heacock said. “And I don't know how much they are using now or not. But really kind of built a little bit of relationship with them through the years and even with Wes [Goodwin] off the field and those kind of things.

“Great relationship, to be honest with you, very professional.”

Streeter said Clemson’s offense will be forced to find the holes in the defense.

“You've just got to game plan specific to that three-down, that stack look and that three-safety look and just be able to find ways and find holes because it looks like there's some holes pre-snap and then post-snap they are moving,” he said. “We just have to do a great job of our post-snap recognition, and our guys have done a great job this week of that preparation.”