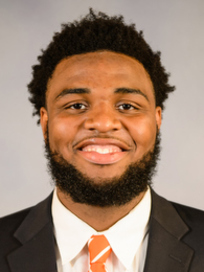 Defensive Line
B I O
One of the nation’s most versatile defensive linemen, having started at end as a sophomore after playing tackle his first season; played mostly at defensive tackle in 2017 … entered 2018 with 193 tackles, 26 tackles for loss, 10 sacks, 43 quarterback pressures, 14 pass breakups, a caused fumble and two recovered fumbles in 1,827 snaps over 44 games (30 starts) … two-time All-American … two-time All-ACC selection … Lott IMPACT Trophy Watch List member in the preseason … preseason first-team All-American by Athlon, Phil Steele, Sporting News and Street & Smith … preseason second-team All-American by Lindy’s … No. 3 player in the nation in the preseason by Sports Illustrated and No. 13 player by NFL.com … No. 3 defensive tackle in the nation in the preseason by Lindy’s … preseason first-team All-ACC by Athlon.

2016: Nagurski Trophy finalist … Bednarik Award semifinalist … first-team All-American by AFCA, Football Writers Association and Phil Steele … second-team All-American by SB Nation, Sporting News, USA Today and Walter Camp … third-team All-American by the Associated Press … second-team All-ACC (media, coaches) … All-ACC Academic Team selection … posted 56 tackles, 13 for loss and 3.5 sacks in 706 snaps over 15 games (15 starts) … also had 20 quarterback pressures … established Clemson record by a defensive end with 10 passes broken up … started in place of Austin Bryant at Auburn and responded with 2.5 tackles for loss, a sack and a pass breakup … defensive player of the game by the coaches … had six tackles and two pass breakups against Troy, while recording a touchdown reception out of the Tigers’ jumbo package … first defensive lineman in Clemson history to score a touchdown out of an offensive formation … had three-yard sack against SC State … posted tackle for loss at Georgia Tech and was big reason the Tigers held Yellow Jackets to just 124 total yards … posted a tackle for loss and pass breakup in win over No. 3 Louisville … returned successfully to his home state in the 56-10 win at Boston College; he tallied eight tackles, including two for loss and a sack, in front of over 100 family and friends … blocked a field goal and converted a fake punt for a first down with a 10-yard rush in win over NC State … had 1.5 tackles for loss at Florida State … had a tackle for loss in 39 snaps at Wake Forest … had two pass breakups in win over South Carolina … had a tackle for loss and recovered fumble against Ohio State in the Fiesta Bowl … posted two pass breakups and three pressures against Alabama in the National Championship Game.

2015: First-team freshman All-American by CampusInsiders.com, Football Writers Association, Scout.com and Sporting News … All-ACC Academic Team selection … had 84 tackles, 4.5 tackles for loss and two sacks in 453 snaps over 15 games (one start) … had 12 quarterback pressures and a caused fumble … posted six tackles (one for loss) in his debut against Wofford … his eight tackles included one behind the line of scrimmage against Appalachian State … had 10 tackles at Louisville … had five tackles, a sack and caused fumble in win over No. 6 Notre Dame … had seven tackles and three pressures against Georgia Tech … had seven tackles, including 0.5 for loss against Boston College … had eight stops in win over Florida State … notched second career sack against Wake Forest … posted two stops and a pressure against North Carolina … made a splash in the Capital One Orange Bowl by becoming Clemson’s first defensive lineman in history to catch a pass when he hauled in a 31-yard reception on a fake punt to give the Tigers a spark in the opening half … finished with 10 tackles against the Sooners in just 35 snaps.