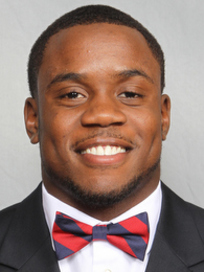 Linebacker
B I O
Veteran linebacker who has grown into a reliable cog in the middle of the defense … entered 2018 with 222 tackles, 18.5 tackles for loss, four sacks, 30 quarterback pressures, two interceptions for 37 yards, two pass breakups, four caused fumbles and a recovered fumble in 1,672 snaps over 34 games (26 starts) in his career … his 222 tackles entering the year were third among active ACC players … No. 57 player in the nation in the preseason by Sports Illustrated and No. 99 player by NFL.com … preseason first-team All-ACC by Athlon, Phil Steele and Street & Smith’s.

2018: Posted two tackles in season opener against Furman … added six tackles and a sack at Texas A&M … posted three tackles vs. Georgia Southern … missed the Georgia Tech game with an injury but returned to lead Clemson with 12 tackles in a comeback win vs. Syracuse.

2016: Earned defense’s Most Improved Award … second-leading tackler with 124 stops over 15 games (15 starts) … tied for team lead with 13.5 tackles for loss, while adding 3.5 sacks and 16 quarterback pressures … posted team-high 14 tackles in win at Auburn to open the season, three were for loss … added a sack against the Tigers … named ACC Linebacker of the Week for his performance … posted seven tackles, including two for loss, and an interception in win over Troy … had a tackle for loss at Georgia Tech … tallied 11 tackles in 100 snaps against No. 3 Louisville … posted 10 stops in the road win at Boston College … leading tackler with 10 in overtime win over NC State … defensive player of the game by coaches following an 11-tackle, 1.5 sack effort at Wake Forest … led the way with 11 tackles in ACC Championship Game against Virginia Tech … posted eight tackles, one for loss and a caused fumble in 31-0 shutout over Ohio State … notched nine stops, including 2.5 for loss, in National Championship Game against Alabama.

2015: Had 11 tackles in 63 snaps over seven games … also had four quarterback pressures … posted a tackle in 14 snaps in his first game against Wofford … played 20 snaps and contributed two tackles and three quarterback pressures at Miami … sat the Wake Forest game due to concussion suffered in practice … came up with a critical fourth-down stop on a running play in the Orange Bowl win over Oklahoma.

Before Clemson: Rated as the No. 18 inside linebacker in the nation by ESPN … No. 17 player in South Carolina by 247Sports.com … Shrine Bowl selection … led Belton-Honea Path High School to an 11-2 record and the third round of state playoffs as a senior … had 118 tackles, three tackles for loss, two interceptions, a recovered fumble and blocked punt as a senior … had 205 yards and six touchdowns on 47 carries as a senior … had 139 tackles, 13 tackles for loss and 2.5 sacks as a junior … had 115 tackles, 15 tackles for loss, two sacks and one caused fumble as a sophomore … three-time state weightlifting champion; also played basketball and ran track … coached by Russell Blackston at Belton-Honea Path High School … recruited by Chad Morris.