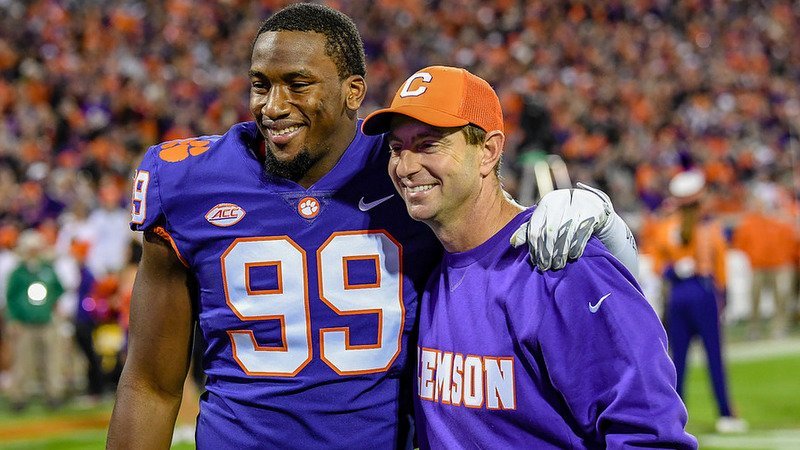 Clelin Ferrell won the inaugural Tim Bourret Award, which is given to the Clemson player who best represents the university in the media.

CLEMSON, S.C. — Former Clemson football player Michael Allen, now a successful architect in the Greenville, S.C. area, received the 2019 Brian Dawkins Lifetime Achievement Award at the Clemson Football Awards banquet on Saturday night. The honor is presented each year by the program to a former player who has had success professionally and in terms of community service after his Clemson career.

Allen was one of the most versatile football players on Tommy West’s teams between 1995 and 1998. The four-year letterman was a solid contributor to three bowl teams. He started his career as a running back as a freshman, then played on defense his final three years.

An off-and-on starter, he had a 50-yard interception return in Clemson’s season ending victory over South Carolina in 1998, and also had a career-high 10 tackles as a starter against NC State that same year.

Allen was a two-time recipient of an ACC Community Service Award and was honored as a Peach Bowl Scholar-Athlete. He was a founding member of the Clemson LIFE Line Community service program at Clemson.

After a professional career that included a stint in the Arena Football League, Allen followed his passion to a career in architecture. He had earned a degree in architecture design at Clemson.

For the last 15 years, Allen has had a successful career in the industry and currently works at McMillan, Pazdan and Smith in Greenville, where his area of emphasis is the design of athletic facilities. Recently he was the Project Manager for the design of 2016 National Champion Coastal Carolina’s baseball stadium in Myrtle Beach.

Recently, Allen was named one of the Best and Brightest by Greenville Magazine and has served on boards and advisory committees for United Way of Greenville, Upstate Forever, Greenville Tech College Foundation and the City of Greenville Planning Commission.

Allen founded his own non-profit organization called LeadRs, a reading and leadership development program for African-American young men. He was recently named to the Clemson Board of Visitors and is the current Chairman of the Leadership South Carolina Board.

Including Allen's selection for this honor, Clemson's full list of awards given at the team's annual awards banquet on Saturday evening is included below:

Most solid, consistent, dependable player at each position

Players outside the starting 11 who contributed the most

Most Improved Players of the Year

As voted on by their teammates

Rookie of the Year Awards

Scout Team Players of the Year

Most valuable players on the unit

Specialist of the Year

Special Teams Players of the Year

Given for the greatest effort on these units

Most blue-collar and unselfish players

Player who best represents himself, his teammates and Clemson University in the media

True Tigers of the Year

5th Quarter Professional of the Year

C.U. In Life Service Above Self Award

For demonstrating a heart for serving others

P.A.T. Man of the Year Award

For personifying manhood through leadership, ethics, demeanor, and community involvement