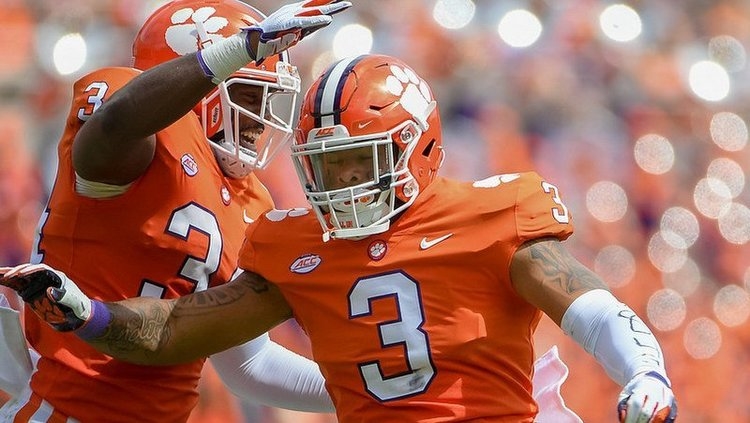 The 49-point victory by Clemson was the largest home defeat suffered by Florida State, surpassing a 44-point home loss to Southern Miss on Nov. 14, 1981. It matched Florida State’s largest margin of defeat at any location in school history, equaling a 49-point loss at Florida in 1973.

Clemson’s 59 points were the most ever scored by any opponent at Florida State.

Clemson has now scored 40 points in three straight games for the first time since the final game of 2014 and the first two games of 2015. It represents Clemson's first time doing so in a single season since a four-game span in games 8-11 of the 2013 season.

Clemson’s 59 points were their most in the 32-game all-time series against Florida State, surpassing Clemson’s 40 points against the Seminoles in 2009.

Clemson played all 72 available players in the victory. Clemson has played all 72 players on the travel roster in each of its three ACC road games this season.

Clemson has now scored 163 points in its last three games, the team’s most points in a three-game span in ACC play since scoring 163 against Duke, Maryland and NC State in 2012.

Clemson has now gained 450 yards of offense in six straight games for the first time since a 12-game streak spanning the final 11 games of 2015 and the opener in 2016.

Clemson has now passed for 300 yards in back-to-back games for the first time since the 2017 College Football Playoff National Championship Game to conclude the 2016 season and the 2017 season opener against Kent State. Previously, the last time Clemson had thrown for 300 yards in consecutive games in the same season was during a four-game span against NC State, Florida State, Syracuse and Pitt in 2016.

During the contest, Lawrence also broke Watson's school record for passing yards by a first-year freshman (1,466).

Clemson earned its fourth victory in games started by Lawrence to tie him with Deshaun Watson's school record for wins as a starting quarterback as a true freshman (four).

Lawrence has now thrown for 300 yards in back-to-back games for the first time in his career. He is the first Clemson quarterback to do it since Watson in 2016, which coincidentally came in games against NC State and Florida State.

Wide receiver Tee Higgins finished the afternoon with 62 yards on six catches. He pushed his single-season career high in touchdown receptions this year to six.

The multi-touchdown game was Higgins’ first of the season and second of his career, matching his career high (two) set against The Citadel on Nov. 18, 2017.

Higgins and Rodgers both became the first Clemson player to record multiple touchdown receptions in a single game since Hunter Renfrow at South Carolina on Nov. 25, 2017.

Higgins and Rodgers became the first Clemson duo to both catch two touchdown passes in a single game since Germone Hopper and Mike Williams against North Carolina on Sept. 27, 2014.

Clemson opened the scoring in the second quarter on a seven-yard pass from Lawrence to Higgins. Clemson improved to 34-0 when scoring first since 2015.

Higgins has now recorded a touchdown catch in three straight games, becoming the first Clemson player to accomplish the feat since Mike Williams' four-game streak in the final four regular season contests of 2016.

Higgins added his second touchdown reception of the game later in the quarter on a three-yard pass by Lawrence.

Defensive tackle Christian Wilkins recorded the first rushing touchdown of his career on a one-yard touchdown plunge in the second quarter.

The rushing touchdown is believed to be the first by a Clemson defensive lineman since the advent of the two-platoon system.

It was Wilkins’ second career offensive touchdown, joining his one-yard touchdown reception against Troy in 2016.

H-back Garrett Williams also recorded the first rushing touchdown of his career on Clemson’s next possession, scoring on a two-yard run on his first career carry.

Williams’ first career touchdown came in the stadium in which his father, Dayne, played collegiately for Florida State.

Rodgers opened the second-half scoring with a 58-yard touchdown reception, his second of the season and his first since scoring Clemson’s first points of the season in the opener against Furman.

Rodgers became the first Clemson player to catch two touchdowns of 50-plus yards in a single game since Artavis Scott against South Carolina in 2014. He joins Scott, Germone Hopper (2014 vs. North Carolina) and Craig Brantley (1974 vs. Virginia) as the only Clemson players to accomplish the feat since 1950 and the first to do so on the road.

On a 15-yard rushing touchdown in the fourth quarter, his third of the season, running back Adam Choice reached 1,000 career rushing yards during the contest to give Clemson three active 1,000-yard career rushers on its current roster (Travis Etienne and Tavien Feaster). Only Ball State, Georgia Tech, SMU and Syracuse entered the week with three active career 1,000-yard rushers.

Wide receiver Hunter Renfrow extended his streak of consecutive games played with a reception to 36, tying Jerry Butler for the second-longest streak in school history.

Renfrow tallied four catches in the game, moving into eight in program history for career receptions with 163.

With Lamar’s interception, Clemson forced a takeaway in a 16th consecutive contest, the program's longest streak since an 18-game stretch across the 2004-05 seasons.

Defensive end Clelin Ferrell recorded a sack in the first quarter to move past Brentson Buckner and Bryant McNeal (22.0 each) for seventh-most career sacks in Clemson history.

Ferrell recorded the fourth forced fumble of his career on the play.

Linebacker Isaiah Simmons added his second forced fumble of the season, the third of his career, in the second quarter.

Defensive tackle Albert Huggins pushed his career sack total to 6.0 with a third-quarter sack of Francois.

Defensive tackle Jordan Williams recorded the first full sack of his career in the third quarter.

Defensive end Xavier Thomas notched his third sack of his freshman season in the fourth quarter.

Defensive tackle Xavier Kelly recorded his first sack of the season, the second of his career, during the contest.

Hyatt became the first position player in Clemson history to record 50 career starts. He is now only two starts shy of Clemson's all-time record of 52, set by kicker Chandler Catanzaro.

With his third point of the game, kicker Greg Huegel passed Aaron Hunt (329 from 2000-03) for second on the program's all-time career scoring list.

Clemson outrushed an opponent for the seventh time in eight games this season. The Tigers have outrushed opponents in 18 of their 22 games since 2017 and are 18-0 when outrushing opponents in that time frame.

Clemson’s 28 points in the second quarter were the most points in a quarter since Sept. 12, 2015 when the Tigers pinned 28 second-quarter points on Appalachian State.

After a scoreless first quarter, Clemson held a 28-0 lead at halftime. Clemson has now outscored opponents by 108 points in the second quarter of games this season, their largest point differential in any single quarter this season.

Clemson is now 92-8 when leading at halftime under Head Coach Dabo Swinney, including a perfect 18-0 mark since 2017.

Clemson has now won the first eight games of a season for the fourth time under Head Coach Dabo Swinney (2011, 2015, 2016 and 2018). All other coaches in Clemson history have combined for three 8-0 starts, including one each by Frank Howard, Danny Ford and Tommy Bowden.

Clemson became the first school to defeat Florida State in ACC play in four consecutive years. Miami previously accomplished the feat prior to joining the ACC.

Clemson bucked a series trend that had seen the home team win 13 of the last 16 games between the two programs prior to Saturday. Of the three previous wins by the visiting teams, two of those squads went on to win the National Championship (Florida State in 2013, Clemson in 2016).

Clemson earned its 25th victory in its last 28 games away from home, including neutral site contests.

Clemson won the 26th of its last 27 games against ACC Atlantic Division opponents.

Clemson has now won 59 of their last 61 when leading at halftime.

Clemson improved to 80-2 since 2011 when leading after three quarters.

Clemson recorded a 25-14 advantage in first downs and is now 81-2 when recording more first downs than their opponent since 2011.