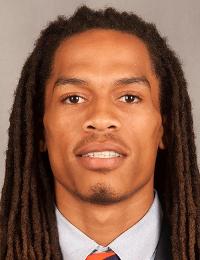 Wide Receiver
B I O
Entered 2019 bowl season with 25 career receptions for 206 yards with three touchdowns in 535 snaps over 41 career games.

2018: Caught 13 passes for 101 yards and two touchdowns in 178 snaps over 15 games … made first catch of the season vs. Georgia Southern … gained 34 yards on two receptions at Georgia Tech … added another catch for six yards vs. Syracuse … caught two passes for five yards at Wake Forest … gained 11 yards on one reception vs. No. 16 NC State … caught his first career touchdown reception on a five-yard pass from Chase Brice at Florida State, also earning team co-special teams player of the week honors for his performance after recovering a fumble in punt coverage … caught two passes, including his second touchdown of the season, for 19 yards vs. Duke … gained 17 yards on two receptions against No. 3 Notre Dame in the Cotton Bowl … added a reception vs. No. 1 Alabama in the National Championship Game.

Before Clemson: Rated the No. 115 overall player in the nation and the 10th best player in Florida by Rivals.com … among 247 Sports top 200 as well … played in the Semper Fidelis All-American Bowl … all-conference, all-district and Tampa Bay Times All-County … honorable mention all-state … four-year player in high school … played his freshman, sophomore and senior years at Plant City and his junior year at IMG Academy … as a senior had 32 receptions for 593 yards and nine touchdowns … had at least one touchdown reception in each of his last seven games as a senior … also played on defense as a senior and had 79 tackles, including 13 stops against Lennard High School … starter at wide receiver and free safety in 2015 … had two interceptions and nine passes defended as a senior … had an interception return for a score and a receiving score against Tampa Bay Tech as a senior … as a junior at IMG, had 25-521 and five touchdowns … as a sophomore at Plant City had 28-562 and four scores … also had three interceptions as a sophomore … as a freshman had 19-466 and a touchdown … for his high school career, had 104 receptions for 2142 yards and 19 touchdowns … that is 20.6 yards per reception … had 23 total touchdowns in his high school career … played at Plant City High for Greg Meyer … played for former Florida State quarterback Chris Weinke at IMG as a junior … Plant City finished the 2015 season with an 11-2 record, the best season in the history of the school … also played basketball at Plant City … selected Clemson over offers from Florida State, Florida, Georgia and Notre Dame … recruited by Jeff Scott and Tony Elliott.