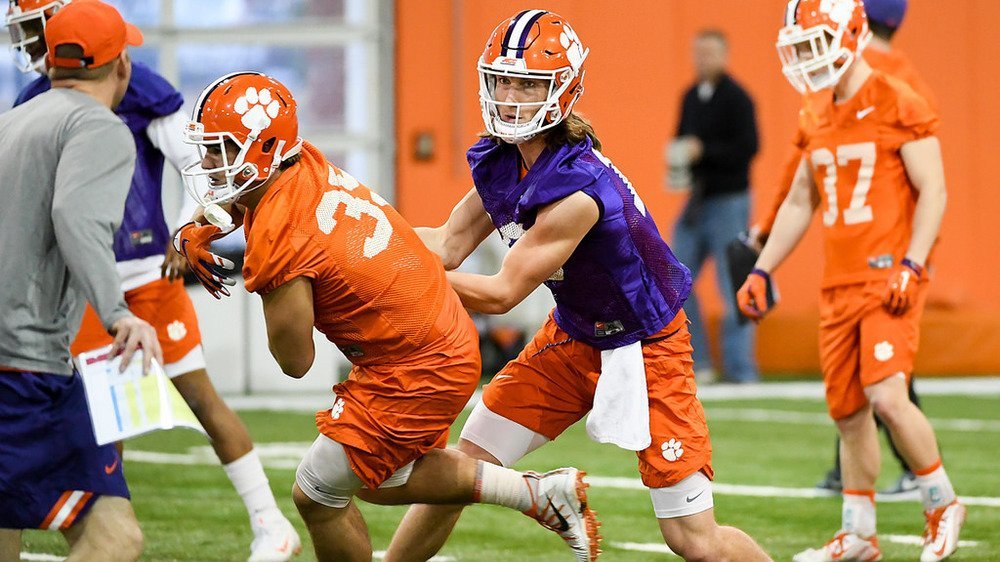 Tempo has been an emphasis in camp, with 5-star freshman QB Trevor Lawrence looking "as advertised" early.

Tony Elliott couldn’t wait to get back on the field after a lengthy look at last season, and he's seen the same from his players early in spring ball.

“It's good to be back on the grass,” the Clemson co-offensive coordinator said after the second spring practice session. “Obviously the last time we were on the grass we didn't have a good taste in our mouth. You can see that there's a sense of urgency with these guys. The leadership that we have and the veterans that we have back have set the tempo.

"Tempo is something that we have been stressing and the guys have been moving around good."

Each offseason, Clemson’s coaches take a look within to see what they can improve on season-to-season. Increased tempo, more explosive plays, effective screen passes and better pass protection are under the microscope for this spring and summer.

Tigers co-offensive coordinator and receivers coach Jeff Scott puts some of the blame on youth for decreased tempo in 2017, where Clemson dropped from eighth to 36th nationally in adjusted pace year-to-year.

“Now with all those guys coming back,” Scott said, referencing a group with seven returning starters and some experienced reserves, “we expect to play faster.”

With his running back group, Elliott expected some drop-off in pass protection going from a veteran player to primarily underclassmen playmakers, but now he’s eager to see them work in pads and their offseason training put into action.

“We forget that Wayne Gallman was a freshman and gave up a few sacks,” Elliott said. “We also had him as a fourth-year player the year before and you see that he gave up a half-sack that he was responsible for - and we gave up quite a few more at the running back position (last season).

“That's a big point of emphasis and I can't wait to get the pads on to see how they're going to take ownership of it. Because they're both physical guys (Tavien Feaster and Travis Etienne), but (now showing) that commitment every single play to get your job done.”

Working faster ahead of the snap is an emphasis in getting there.

“Pre-snap intensity is something that we're really, really focusing on this spring,” Elliott said. “The more that you can process pre-snap - the faster you can play post-snap.”

One of the bigger drop-offs last season came in the passing game, where the Tigers finished in the middle of pack nationally in yards per game (235.5 YPG/61st nationally) after having one of the nation’s best aerial attacks in 2016 (325.8/7th).

“(He have to improve) our screen game,” Scott said. “We know we saw a decline in that last year. We really need to stress defenses horizontally. Some of our outward screens - I don't think we were as efficient and effective as we can be.

“Really the last area (to improve) was explosive plays down the field. When we had the opportunities, we didn't connect. Our standard around here is the 50-50 balls are usually 90-10 balls for us. That's what we're used to with the guys that we have here. Last year we were back in that 50-50 range.

“That's not where we want to be. That's something our guys have spent a lot of time watching video and finding the way to correct that and make some of those plays. We've made some of the plays early in spring ball.”

Clemson averaged 4.3 plays per game of 20 or more yards last season, dropping from 5.9 per in the 2016 title run. The passing game accounted for the deficit, falling from 4.9 20-yard-or-more connections a game to 2.8.

Scott said the QB quartet of Kelly Bryant, Hunter Johnson, Chase Brice and Trevor Lawrence have all had their moments in improving that attack early in spring, with not one standing out above the rest so far. Elliott said that Bryant is taking on the increased competition well.

“You see his confidence and he's earned the right so far to run out there first,” Elliott said. “But he knows he's got competition and he's responding well.”

The five-star and No. 1 overall-rated prospect Lawrence has lived up to his billing.

“Trevor is as advertised,” Elliott said. “He moves well. Is athletic and throws the ball...I've just been impressed with how poised he is as a young guy.”

Kendrick, a converted quarterback, has earned an impressive comparison already.

“He's probably one of the most explosive guys who came through our camp since Sammy (Watkins),” said Scott. “Watching him out here I'm not at all surprised watching him run. Some guys, it's just very effortless and very easy for them to run. Other guys, it's a little more work. He's one of those guys where it's very easy for him.

“There were a couple balls out there (Friday) where I thought the quarterback overthrew him and he just had that fifth gear and went and got it. And that's what the special ones that we've had in the past have been able to do.”

Kendrick is in mix on punt returns as well as receiver this spring, said Elliott.

The five-star OL signee Carman is focusing on left tackle to start practice, per Elliott, and the coaching staff will look to build on to his versatility from there.

“Carman is a big guy that can move and move his feet,” Elliott said. “He's doing a really good job. Obviously as we continue to install, you'll see how much he can handle...As the depth continues to develop, we'll be able to move him around once he can comprehend all he needs to do at tackle.”

On the defensive side, athletic is the operative word.

“Just athletic and can run and can bend,” Tigers defensive coordinator Brent Venables said of the group. “Mike Jones has got good coverage ability and (is) a good athlete in space. K.J. and Xavier are two explosive ends that play long and play fast. Josh and Darnell are two big, strong and athletic bodies that can bend and know how to play inside. You can tell they’ve played inside.”

* Both Elliott and Scott mentioned redshirt senior receiver Trevion Thompson as both an early spring standout and a target the Tigers will count on in 2018.

“Trevion has probably had the best two days of all the wideouts,” Scott said. “Really pleased with where he is. In this age where all around college football, if you don't play for three years, it's time to transfer - you've got to give Trevion a lot of credit for sticking it out. He's been playing behind Hunter (Renfrow).

“He's a guy who can really have an impact for us next year (2018 season). He's smart, he knows multiple positions. Just in two days, he's got reps at all three spots. His leadership this year in the offseason and out on the practice field has been really good. He's made some really good plays. He's gotten quicker and very mature.”

Elliott described Thompson, a former four-star prospect with 32 career receptions for 317 yards and a touchdown, as a “putty guy.”

“He's a guy who has been in our program and we're really counting on his veteran leadership," Elliott said. "He's a guy who can play all the positions and you've seen him all over the field. He's made some plays.”

Overall in the receiver corps, Elliott is eyeing a number of Tigers making moves.

“T.J. Chase was a guy who got off to a really, really good start last fall camp and was caught in a situation where there was a lot of depth at his position,” Elliott said. “But with Trevion's ability to move around, T.J. has gotten more opportunities to get some reps. Diondre (Overton) is a guy who continues to get better every single practice. I think we all know what we've got in Tee Higgins - we just have to strain him and really see how much he can handle.

“And DK (Kendrick) is a guy early on out of the gate that is really, really pushing these guys athletically.”