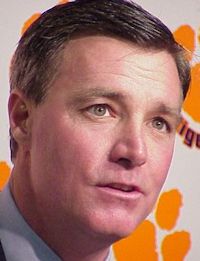 Bowden was hired as Clemson's head coach before the 1999 season. Bowden's Clemson teams went to a bowl game every year he coached there, except in 2004, when, after a brawl with rival South Carolina, both teams agreed to decline any invitation to a bowl game for that year. He resigned on October 13, 2008, after leading the team to a disappointing 3–3 record (1–2 ACC) at the midpoint of a season in which the Tigers had been an almost unanimous preseason pick to win their first ACC title under Bowden and were ranked #9 in the preseason polls. Assistant head coach/wide receivers coach Dabo Swinney was named as interim head coach for the remainder of the season.

Bowden attended and played football for West Virginia University from 1972 through 1976. He is married to the former Linda White and has two children, Ryan and Lauren. He is the son of former Florida State Seminoles head coach Bobby Bowden and has two sisters and three brothers, including Terry, the head coach at the University of Akron, and Jeff, who serves as an assistant coach on his brother Terry's staff.