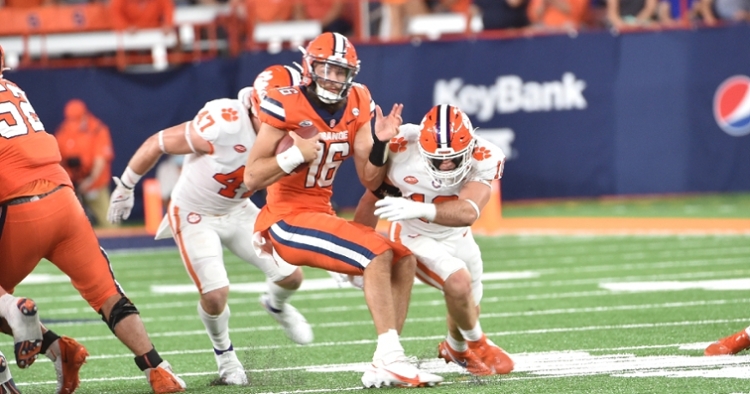 SYRACUSE, NEW YORK – No. 25 Clemson went on the road and eked out a 17-14 win over Syracuse in the Carrier Dome Friday night.

Syracuse took over on its own seven-yard line with 4:40 to play and converted three third downs and a fourth down to set up a 48-yard field goal attempt by Andre Szmyt, who left the kick well short and left of the goalposts with 38 seconds remaining to seal the Tigers’ victory.

A note, a quote, and a stat to sum up the action from Upstate New York.

Clemson has failed to score 20 or more points in regulation against its five FBS opponents for the first time since 1994 when it scored six, 13, 14, 13, and no points.

The Tigers have now won back-to-back games by eight or fewer points (one possession) for the first time since its 2016 national championship season against NC State and Florida State.

With all of the close games Clemson has played in this season, opposing teams have made it interesting with late drives and a chance to win the game, but Brent Venables' defense has held deep in their own territory.

However, Venables said he doesn’t like his team getting the reputation of being a bend, don’t break type of unit.

“I'm not a bend, not break kind of guy,” Venables said after the Syracuse game. “We've got to be cleaner, that's the bottom line...We've got some young guys who are doing some things that just aren't disciplined. We want to play good, consistent, tough defense and make people earn stuff. I'm not big on bend, not break, whatever that means.”

Clemson punter Will Spiers – who may just be the player of the game after his fourth-down pass to Davis Allen set up Clemson’s second touchdown of the game – punted the ball eight times for 349 total yards.

CJ Spiller to be honored for Hall of Fame next week in Las Vegas
Post your comments!