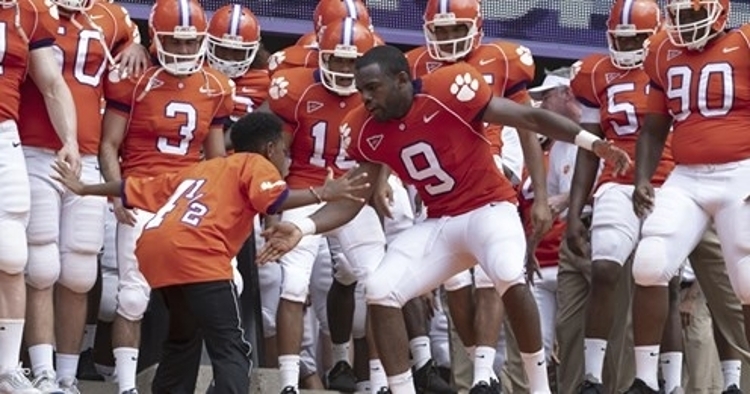 The movie was released to the public Friday on Disney+. (Photo per Disney).

The Disney movie “Safety” probably won’t win any Academy Awards and its release straight to streaming services ensures it won’t set any box office records. What it has done is take the Clemson world by storm.

The movie, the true story of Ray "Ray Ray" McElrathbey and his younger brother Fahmarr, was released to Disney’s streaming service Friday and Clemson fans didn’t waste any time in watching the movie.

McElrathbey played for the Tigers from 2005-07, when a guy named Dabo Swinney was the wide receivers coach under Tommy Bowden. As the brothers’ mother battled drug addiction and their father struggled with gambling, McElrathbey didn't want Fahmarr to get lost in the foster care system. McElrathbey took Fahmarr to Clemson from their hometown of Atlanta, and he successfully petitioned the courts to become his younger brother's legal guardian.

Every morning, McElrathbey woke Fahmarr and sent him off to middle school, then he went to class and football practice, returning home in the evening with food for Fahmarr he snuck out of the cafeteria. After helping his brother with his homework, McElrathbey put him to bed, and then the college football player finished his own homework. McElrathbey was 19.

The movie tells that story, and we reached out to some Clemson fans for their reviews:

*Awesome movie! Ray Ray is an awesome man. A kind of man this 60 year old guy can still strive to be!! It was his choice to do the right thing for his brother. In the grand scheme of life, family IS the most important thing we have! Larry Wilson

*The movie was a great representation of the Clemson culture. Everyone is family and helps each other become the best version of themselves. There is definitely something special in these hills. I was the mascot when Ray Ray played football. I had a front row seat to watch a city and university show the nation selfless love. I’m grateful for all the lessons Clemson taught and showed me. Tyler Alewine

*It was fun to watch because it was all Clemson (too much in some ways), but that is also what will likely turn some non-Clemson viewers off. The Death Valley scenes make you nostalgic for what now seems like forever ago. (Hard to believe it was just last season when we cheered our heads off for those actors-turned-Tigers!)

The set dressing was lazy. The set decorator just ordered everything with a paw off the internet, and wardrobe was also just a raid of the stores downtown. But Clemson and Nike got plenty of product placement! There are composite characters (primary example: Coach Simmons) so don’t get caught up in that, and lots of over-acting. My advice to Clemson fans who know the era, the players, the story and how compliance/NCAA works: you have to willingly suspend disbelief.

This is not a documentary. It is a scripted feature that has to make a film that appeals to the masses. Have fun with it. Just sit back and appreciate that a film featuring Clemson (which is quite complimentary) made it to the screen, and enjoy that healthy dose of cheese with your popcorn! Shawn Haney

*The movie Safety, isn’t just about another football team or player. This movie shows the true meaning of what a family really is. Seeing a team come alongside a teammate when in need is an amazing sight. Even if you aren’t a Clemson fan, this is a movie that you need to put on your list to watch. One that is good for the whole family. It definitely leaves you feeling great! Rachel Bell

*My 2 cents, for whatever it’s worth, is that parts of the movie were pretty cheesy (the “we ready” moment before the game comes to mind), but overall I enjoyed it. I know some people didn’t like names being changed and all but that’s not Disney’s fault. If nothing else, I think Disney spent a lot of money to recruit for Clemson in the future (lol). Lots of mentions of family and camaraderie not just about the team but community as well! I enjoyed it. Dylan Brooks

*The movie is awesome and inspiring! Kevron Harris

*I would give it 4/5 Dabos. The story was great, but the acting was average. I loved the location shots. It was very Hallmark-esque. Mark Wease

*I was ok once I quit waiting for names I knew other than Bowden and McElrathbey. Was a very good film with a message of hope and family. 4.5 paws/5. Mike Humphreys

*My friend who is from upstate NY and didn’t know where Clemson was until she met me absolutely loves it. She said it’s better than The Blindside and she wants to go see Clemson in person now! Lisa Gantt

*I loved Ray Ray standing by his brother and believing in family above personal ambition even though it was difficult. The acting was average at best and I was disappointed in the lack of southern accents. Frankly, Mr. and Mrs. Bennett were the only ones with southern accents and we all know their accents are truly genuine. Samantha Russ Apgar

*Even as a Gamecock fan I thought it was good. John Christopher James

As far as the movie Safety is concerned... “ Its the very definition fo w*hat Clemson Family and Unity of the Clemson Community truly is.” Ross Kaiser