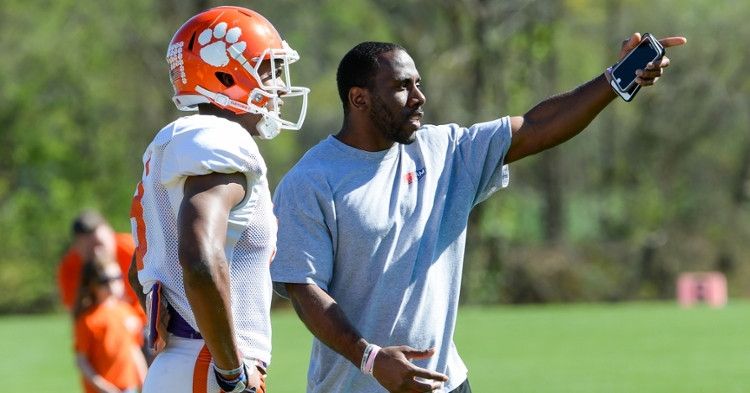 Spiller says he is all about building relationships.

Clemson great CJ Spiller was formally announced as the Tigers’ new running backs coach Thursday morning, and while there is no doubt he was a great player, no one knows what kind of coach the Florida native will wind up being.

We’re about to find out as Spiller takes over the running backs room from offensive coordinator Tony Elliott, who will now coach the tight ends. It’s the culmination of a few years of soul-searching for Spiller, who spent last season as an unpaid graduate intern at Clemson.

“It's kind of funny, I knew once I got done playing that I would be kind of figuring out what I wanted to do with my rest of my life,” Spiller said. “I actually started volunteering over there at Liberty High School, helping out with their track program. That's kind of where that itch of coaching kind of came in, but then, really didn't know at what level. So coach (Dabo) Swinney invited me to come here on staff and kind of just go through the year and just kind of see how I like it. It was fun to kind of get on the other side and kind of see the behind the lens, how the coaching world really works. And I was able to sit in on coach Tony Elliott's meetings with the running backs, kind of seeing how he ran his room, how he carries himself on the practice field. It was awesome coming back and just being now a part of that staff and seeing it from a coach's view.”

Part of being a coach in the college ranks is recruiting, and while Spiller is still a novice at recruiting players, he is well-schooled in what it takes to be recruited. Spiller was current head coach Dabo Swinney’s first high-profile recruit.

“It was a very interesting recruitment process with coach Swinney, because one of my former teammates, Kevin Alexander, he already had committed here, so I always used to see coach Swinney come in and I would never really pay him much mind because Clemson really wasn't on my radar at the time,” Spiller said. “But I just remember just being in a free period of mine, and he comes in the building and I kind of was able to sit down and really just talk to him. I was really blown away, like this guy's really unique.

“He wasn't trying to really sell me on Clemson or anything. He was just asking me how the process was going and how I was feeling. Never asked me who was my top five (schools). He asked me if I had ever heard of Clemson and I told him I did because of me growing up a huge FSU fan. And then just casual conversation went from there. Text messages, checking up on me. I remember after one of his family vacations him stopping through Lake Butler after I already had been committed to Clemson. So I knew right then that I had chosen the right spot.”

Spiller went into detail on the days leading up to his commitment.

“He (Swinney) brought in coach Tommy Bowden on that last home visit. Right before he brought him in I pretty much told him I was 99 percent sure that I was coming to Clemson,” Spiller said. “He came in and everybody knew I wanted to surprise my mama on signing day, but he was ecstatic. Just somebody that was very genuine. He was different from the other guys that recruit, he was very honest, authentic, really wasn't any pressure. I remember him always telling me, ‘Hey, if you don't like Clemson, just tell me, and I'll stop recruiting.’ So once he said that, I knew that he was very authentic, and came up here and worked and I fell in love with it. And here we are now, 14 years later, still loving Clemson.”

Spiller said the people in the Clemson program and community are different than other places.

“The thing that makes Clemson so special is just building relationships with people. I think that's the one core value that we have here at Clemson, getting that relationship, getting to know the kid, get to know their parents, getting to know who they are as people, not just as players,” Spiller said. “And I think that's kind of what separated us from a lot of programs in the country. We're not going to just jump the gun. No, we want to get to know you as an individual first, and get to know your parents, get to know your coaches. What you like, what's your interest outside of just football. And that's one thing I can say that has remained constant since I got recruited. I was able to see it in the staff last year and see how our coaches work.

“It's all about a relationship, and I think that's key honestly, in building somebody. Because I always tell people that when you come to college or whatever, you come to Clemson, it's not a four-year deal. This is a lifetime agreement that you make when you decide to come here. You want to have that relationship. So, when you're off being a husband or having kids, you still want to be able to call your guy that recruited you or your position coach. You just pick up the phone and just have a casual conversation. I think that's what we do here best at Clemson, it's building those relationships that's going to last a lifetime.”

“Recruitment has changed so much since I came out of high school, but some things still remain constant, and that's building relationships with people. I'm a huge relationship type person,” he said. “It’s just sitting down and just thinking about what are you looking for in school. Everybody's different, what they look for the school. Everybody has buildings and all that, but what's one thing that you truly are looking forward to. For me, it was the community, honestly. I came from a small town. That's what I was looking for. And when I came up here to Clemson that's what it provided for me, the family atmosphere.”

He then said he will have a ton of advice to give prospects.

“To me, it's just, don't let the recruiting process overwhelm you. A lot of times you have social media and so many outlets from different people, rivals, all these different reporters trying to reach out to you wanting to get the quotes, what are you thinking here? Just be mindful or have someone that can handle that,” Spiller said. “So that way you can truly still enjoy the recruiting process, but still enjoy your high school years. Because once those high school years are over, they're over. Off to a new chapter in life. I would just tell them to just have a game plan for what you want to do, especially if you're a senior.

“When you go on those visits, enjoy those visits. Don't take those things for granted, because the team that constantly brings you into their campus, that must mean they think truly highly of you. Don't take those things for granted. When you get on those, the thing I would tell you, gather as much information as possible. Write down questions that you have, and have really tough questions, honestly. Things that you truly want to be answered while you're on that visit. So those would be some of the tips that I give some of these young kids that are getting ready to start the recruitment process.”