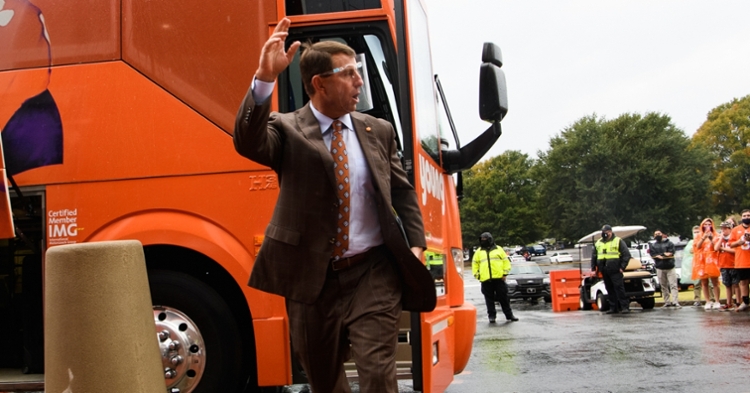 Kathleen Swinney pecked her husband on the cheek well after midnight early Tuesday morning and wished him a happy anniversary. Dabo Swinney’s mind went blank for a second – their wedding anniversary is in the summer – and then she reminded him. It’s been 12 years since he was named as the interim head coach of the Tigers.

It’s been a fantastic 12 years. Clemson entered the third decade of the 21st century after Swinney helped author one of the most prolific 10-year periods in the history of the sport. Clemson posted a 117-23 record under Swinney’s leadership in the 2010s, and the program’s 117 wins trailed only Penn (124 in the 1890s) and Alabama (124 in the 2010s) to tie for the third most in a decade in major college football since 1890.

After a 6-7 campaign to open the decade in 2010, Swinney’s Tigers responded with nine consecutive 10-win seasons, tied with the 2001-09 Texas Longhorns for the third-longest streak in FBS history. Clemson won at least 12 games in each of the last five seasons, tied for the longest such streak in the modern era and only two seasons shy of Penn’s record seven-season streak from 1892-98. Clemson won 69 games in that five-year span from 2015-19, the most in a five-year span in the AP Poll era.

Clemson secured its record-tying fifth College Football Playoff berth in 2019, matching the five collected by Alabama from 2014-18, and extended its mark in CFP contests to 6-3 (including a 4-1 mark in semifinal games). The Tigers earned the berth following their fifth-consecutive ACC championship, becoming the first team in college football history to win five straight conference championship games since conference title games were created in 1992.

On this date in 2008, Swinney was the wide receivers coach and he was back at home after a recruiting trip to North Carolina. As he played with his three sons, Swinney had no idea what the next few days would bring. What happened next would change Clemson football and the life of William Christopher Swinney forever.

The Tigers entered the 2008 season ranked in the preseason top 10 and were led by a dynamic running back duo in CJ Spiller and James Davis. The Tigers opened the season with a blowout loss to Alabama in the Georgia Dome, but won the next three games by a combined 126-26.

The Tigers lost 20-17 at Maryland in late September and went on the road to Wake Forest for a Thursday night matchup with the Demon Deacons on Oct. 9. Wake Forest held on for a 12-7 win, and Tommy Bowden’s fate was sealed.

Bowden was fired after the 3-3 start, and Athletic Director Terry Don Phillips turned the program over a little-known wide receivers coach named Dabo Swinney, a man who had never been a coordinator or had any head coaching experience. It was a move ridiculed by some national media at the time, and there have been a few rough patches along the way (the five-peat, 2010, the Orange Bowl loss to West Virginia) but there is no doubt that it changed Clemson’s fortunes for the better.

“I thought about it this morning, but only because of Kath,” Swinney said during his weekly press conference Tuesday. “We were up late last night, and it was about 12:30, and she rolled over and gave me a kiss on my cheek and said, 'Happy Anniversary.' I didn't really know what she was talking about and I panicked for a second. I thought I was having an out-of-body experience there and then I realized it was October 13th and that was pretty cool.”

“I was thinking about it when I woke up this morning and I obviously knew that today, about right now, I was in Terry Don's office as a matter of fact and trying to chart out the next seven weeks,” Swinney said. “And ironically, we were playing Georgia Tech. Hopefully, we can get a different result 12 years later. It's amazing. It's hard to believe. Time flies. It's incredible. It's cool for me because I have a bunch of those guys on my staff now - CJ Spiller, Miguel (Chavis), (Tyler) Grisham, (Xavier) Brewer, Rashard Hall, DMac (Deandre McDaniel) a lot of guys that are on this team now that were here and playing. It's really cool to have these guys around. A bunch of those guys texted me this morning. Should have bet on the over, that is probably what we should have done back then.”

1??2?? years ago today, Dabo Swinney was named the interim head coach and told the @ClemsonFB family to be #ALLIN ...