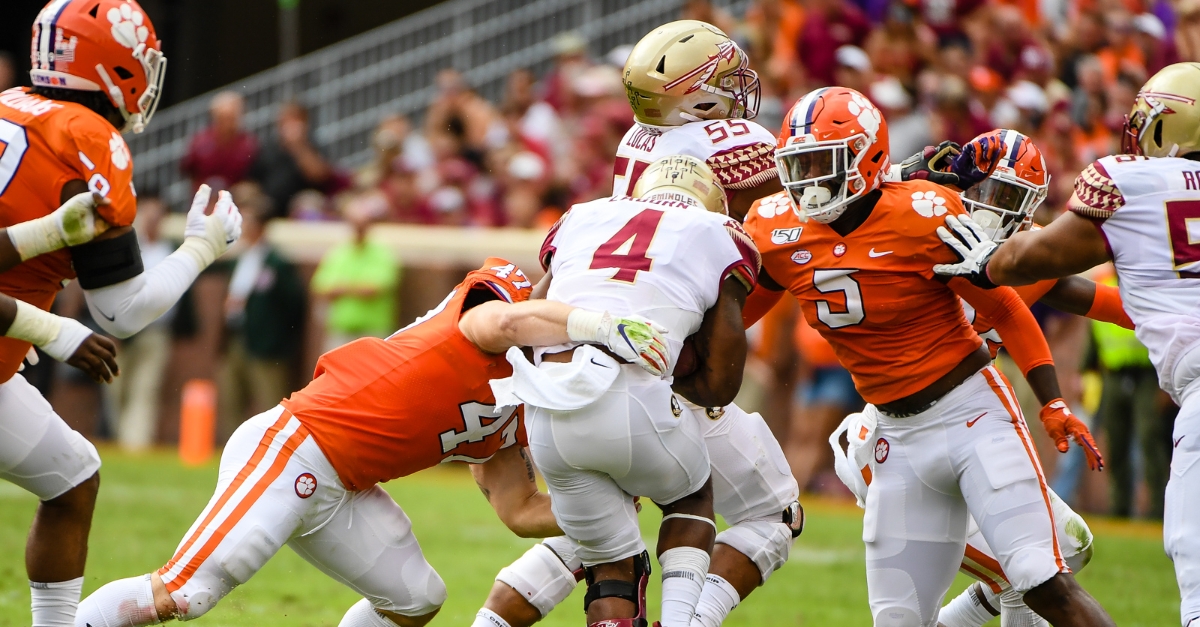 Florida State joined the ACC in 1992 and won nine consecutive ACC titles. In those nine seasons (1992-2000), they played in five Orange Bowls, three Sugar Bowls, and a Fiesta Bowl, and were crowned National Champions twice. They were also a win (against Florida) in the Sugar Bowl away from another title in 1996. They posted a 99-11-1 record overall and a perfect 9-0 record against Clemson. The Seminoles coaching staff was led by Hall of Famer Bobby Bowden, and throughout the nine-year run included future head coaches Brad Scott, Chuck Amato, Mark Richt, and Manny Diaz.

What was Clemson doing during those nine years? Not a whole lot. The Tigers went 59-46 from 1992 to 2000. After the Tigers 1991 ACC Championship, Florida State joined the conference right as the Tigers were headed to the doldrums. Clemson went through three different head coaches (Ken Hatfield, Tommy West, and Tommy Bowden) during that time and ranged from fairly good (9-3 in 1993 and 2000) to fairly bad (3-8 in 1998).

What’s so interesting about this is that the two programs have switched places and the resemblance to each other’s 1990s rival is uncanny.

This remarkable role reversal is a reminder to be humble and to enjoy the good times while they’re here. For Clemson fans, these are the “good ol’ days.” It is also worth studying what ended “the good ol’ days” for Florida State.

The Bobby Bowden era slowly diminished after offensive coordinator Mark Richt left to take the head coaching position at UGA in 2001. Bobby Bowden’s son, Jeff, took the offensive coordinator role and held it for six seasons until Jimbo Fisher joined the staff in 2007. The loss of a critical staff member and failure to replace him adequately played a big role in ending their great run in the 90s.

Coach Swinney has also hired well when he did have to hire a new assistant. Chad Morris left for the SMU job and was replaced internally by Tony Elliott and Jeff Scott. DT Coach Dan Brooks retired, so Dabo tapped his network to bring in Todd Bates. When DB Coach Charlie Harbison left for Auburn after 2012, the Tigers hit a home run with the Mike Reed hire.

Keeping the Tigers’ current run of success going will depend on retaining coaches and making wise hires when some inevitably leave. Fortunately for the program, they’ve proven to have a knack for both.

As for the Seminoles' dreams of returning to glory, they’ll have to hope their drought doesn’t stretch as long the Tigers’ drought did. After Clemson’s 1991 ACC Championship, it was 20 years before they captured another (2011). If the Seminoles go 20 years between ACC titles, it will be 2034 before their next one. While nobody expects FSU to get bogged down for that long, this season is showing that it likely won’t be a swift two-year turnaround.

When the Tigers take the field in Tallahassee this season, they’ll be heavy favorites focused on winning a National Championship while Florida State will be hoping to pull off an improbable upset and change the projection of their program to get back to the glory they tasted not too long ago. In that sense, it’ll be just like watching 1990s ACC football, except totally reversed.