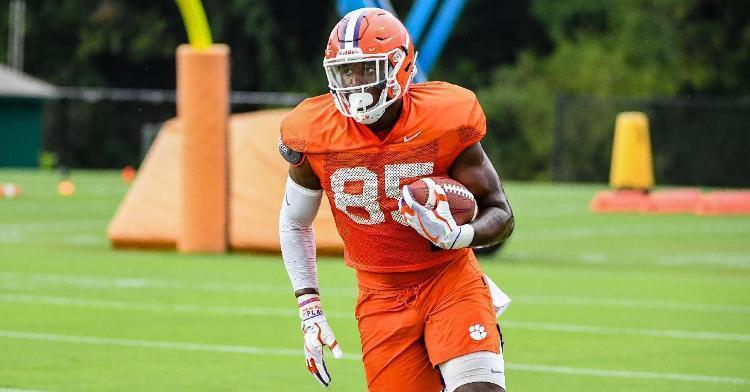 CLEMSON – Clemson is expected to have one of the nation’s top receiving groups this season, but that doesn’t mean they are a finished product. That means that head coach Dabo Swinney returns to his roots from time to time to coach, and Monday was one of those days.

The Tigers held the third practice of fall camp Monday afternoon, and Swinney spent the early part of practice working with the receivers, his old group. Swinney paid special attention to freshman Joe Ngata, with Ngata eventually earning praise for getting into and out of his breaks with precision.

There are plenty of other news and notes to pass along.

*Former FSU quarterback EJ Manuel was a visitor at practice. Manuel, who joined the ACC Network in June, was a guest of former Clemson offensive lineman and ACC Network host Eric Mac Lain. Manuel said he was blown away by Clemson’s facilities, but even more so by Swinney.

Manuel said Swinney treated him like a VIP and took him on a tour of the facilities just a few minutes before the start of practice, and said that he can’t think of any other coaches that are that personable. Former Tiger QB Rodney Williams and former tight end Stanton Seckinger were also in attendance.

*Sheridan Jones and Derion Kendrick were drawing praise from Reed in some coverage drills. Both were getting in on some pass breakups and picks. Freshman Andrew Booth took a little extra instruction and looks like he will be a contributor this season.

*Scouts from the Carolina Panthers, Baltimore Ravens, and Denver Broncos were also in attendance.

*Wide receiver Diondre Overton continues to impress me. He looks like a different player than the one we saw last fall, and is practicing with a purpose. I can see a situation where the Tigers use four wide receivers – especially when Amari Rodgers returns from injury – instead of a tight end in passing situations.

Speaking of tight ends – Jaelyn Lay looked much better today. Once he gets the playbook down, he will be a weapon.

*We continue to see the emergence of leaders. Offensive lineman Gage Cervenka and safety Denzel Johnson were two that stood out today.

*Running back Chez Mellusi went down early with a knee injury, but trainers quickly wrapped the knee and he returned to practice.

*During warmups, quarterback Trevor Lawrence went up to each wide receiver and it looked like he had a different handshake for each receiver.

*Back to leadership – during defensive line drills, one of the freshmen (who came in during the spring) messed up on a drill, and Todd Bates made the unit do up-downs. This did not sit well with veteran Jordan Williams, who was quite vocal and descriptive with his displeasure. I am almost certain that everyone within sight of the practice fields heard, “Wake the *&^% up!!”

*We continue to be impressed with freshman quarterback Taisun Phommachanh. Look – the Tigers have the second-best quarterback in the ACC with backup Chase Brice (I’ve seen those other guys in the league, and they are not Chase Brice) but Phommachanh is a baller. One bystander – a former quarterback – said he’s a combination of Kelly Bryant and Tajh Boyd (he looks like Boyd when he throws), but is a better passer than Bryant and a better runner than Boyd. I can see that.

*The coaches continue to lean on veteran running back Darien Rencher, who is also providing leadership for a lot of the younger players.

*Running back Travis Etienne kind of gets lost in the shuffle because everyone wants to talk about Lawrence. People forget that Etienne was the ACC Player of the Year last year, racked up all those yards, and really didn’t stand of chance being the preseason player of the year.

Etienne looks better than ever. He looks stronger, especially in his lower body, and now is comfortable enough to where he just glides to the hole and then accelerates. He is one of those players I can’t wait to see in action, simply because he’s a threat every time he touches the football. In fact, I knew I needed to make my way to all of the position groups but stopped just to watch.