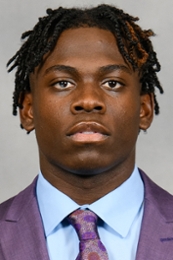 Cornerback
B I O
Highlight-reel athletic corner who enters 2021 credited with 36 tackles (2.5 for loss) five pass breakups, two interceptions, a sack and a fumble recovery (which he returned 21 yards for a touchdown) in 400 defensive snaps over 24 games (four starts).

2020: Credited with 30 tackles (2.5 for loss), four pass breakups, two interceptions, a sack and a 21-yard fumble return for touchdown in 335 snaps over 11 games (four starts) … second-team All-ACC pick … also earned second-team All-ACC honors from the AP and PFF … All-ACC Academic Team selection … recorded three tackles and a pass breakup at Wake Forest … made one tackle vs. The Citadel … registered three tackles (all solo), two pass breakups and a highlight-reel one-handed interception vs. Virginia, which his interceptions and pass breakups coming in coverage against two 6-foot-7 Cavalier targets … earned ACC Defensive Back of the Week and shared team defensive player of the game honors for that performance against Virginia … recorded a tackle for loss and an acrobatic pass breakup vs. No. 7 Miami … credited with a team-high seven tackles (one for loss) and his first career sack at Georgia Tech … registered five tackles and a 21-yard fumble return touchdown vs. Syracuse … contributed five tackles (0.5 for loss) vs. Boston College … added two tackles at No. 4 Notre Dame … recorded a tackle and his second career interception vs. Pitt … had two tackles in Sugar Bowl vs. No. 3 Ohio State.

2019: Credited with six tackles and a pass breakup in 65 defensive snaps over 13 games … recorded a tackle in his collegiate debut vs. Georgia Tech … added a tackle and a pass breakup at Syracuse … credited with two tackles vs. Florida State … played on special teams at Louisville and vs. Boston College … made one tackle vs. Wofford and vs. Wake Forest … ACC Honor Roll selection.