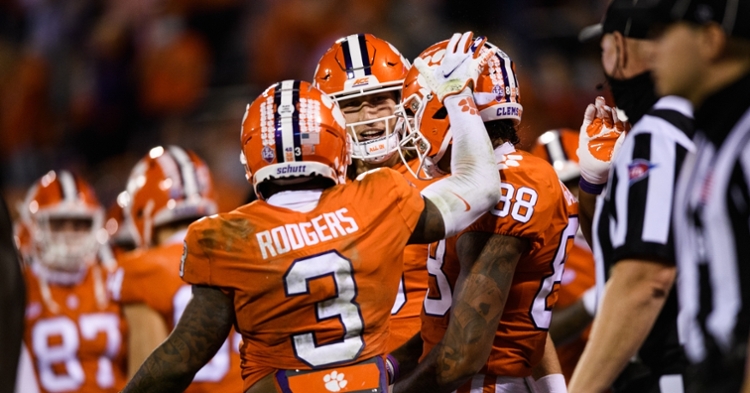 No. 1-ranked Clemson dominated on Saturday in Death Valley with a 42-17 win over No. 7 Miami. We take a deeper look into the game with the help of Pro Football Focus:

This one’s pretty obvious after Etienne was a one-man wrecking crew of the Hurricanes defense with 149 rushing yards on 17 carries (two TDs) and hauling in eight receptions for 73 yards. In PFF’s often harsh grading technique, Etienne received the ‘A’ in the run game (91.3; his highest grade of the season and fourth-highest of his career) and also graded well as a receiver (82.9; Clemson game-best) and pass blocker (79.3). Avoiding six tackles total by PFF’s eye, he racked up 110 of his rushing yards after contact for a 6.5 average per carry that way. He and cornerback Derion Kendrick made PFF's team of the week.

Galloway tallied four catches in four targets with two touchdowns and two more first downs gained, showing just what the offense can do with an effective tight end in the passing game. He averaged 14.3 yards after catch in his 74 total yards.

Look at the convoy of offensive linemen on this genius play call...

By the numbers, Lawrence had by far his worst grade of the year (67.5), but he also faced his toughest defensive challenge and kept out of the INT category yet again. Lawrence connected on 30-of-43 passes, averaging seven yards per attempt and seeing two catchable passes dropped. He was most effective in the middle of the field with 12 completions in 15 throws from 0-20 yards out for 136 yards and a touchdown.

* Buoyed by Etienne’s big game, Clemson graded best in the run game offensively (83) and easily the best this season there (69.6 vs. Virginia next-best).

* With opponent and weather some factors in, Clemson had its worst grades of the season passing (69.2), receiving (61.9) and pass blocking (60).

* Offensive guards Will Putnam (88) and Matt Bockhorst (84.1) came out best in the pass blocking grades, while right tackle Jordan McFadden (76.4) and receiver Cornell Powell had high marks in the run blocking game (76.3).

* Tight end Davis Allen continues to shine in limited opportunities in the receiving game, where he has four catches in four targets for 84 yards and scored a TD versus the ‘Canes. -- Brandon Rink

Kendrick continues to draw high grades, and turned in a team-best mark of 91.3 against Miami. Kendrick was on the field for 22 plays and came away with an interception, a pass broken up, and four tackles in limited duty as cornerbacks coach Mike Reed rotated his talented corners. Kendrick plays the field corner (wide side of the field) on most of his plays and is completely shutting down one side of the field.

Kendrick was great in 2019 considering he was a WR in 2018, but now he is looking like one of top CBs in the country. pic.twitter.com/1IWtwJVWM0

Take a bow, Andrew Booth, Jr. The sophomore cornerback out of Georgia made a highlight-reel interception against Virginia last week and then had a beautiful pass breakup near midfield Saturday where he contorted his body and jumped high to swat the ball away.

Andrew Booth is a freaking specimen.

Sheridan Jones, however, ranked second only to Kendrick in coverage and picked off a pass with an 89.1 grade.

There isn’t any doubt that the return of defensive tackle Tyler Davis was big for the Clemson defense. Davis eats up double teams and makes plays up and down the line of scrimmage (71.1 grade), but Jordan Williams was among the highest grades defensively in his 11 snaps, where he graded an 83.7 on 10 pass rush snaps with three QB hurries and tackles.

* Field goal kicker BT Potter had three field goals blocked, but those appeared to be more of a protection issue than a kicking issue. Defensive end KJ Henry had protection on the right side of the line and drew a team-low grade of 25.4. Not surprisingly, special teams graded a season-low overall at 30.1 (after grading as high as 90.1 in the opener at Wake). -- Brandon Rink and David Hood

For as well as Powell blocked in the running game, his grade as a receiver on passes was a team-low (52.3) with two catches in five targets for 12 yards and no tackles avoided. Over four games, he has a 54.6 receiving grade over 106 snaps on passes.

Zanders graded the lowest of the defensive starters and his personal lowest of the season (56.3), with high marks as a tackler (84.5) but on the low end from a coverage standpoint (50.1), where he drew a pass interference call.

PFF and Clemson’s staff seem to be at odds -- at least they were last week after Stewart was among the lower grades out of Virginia (53.4) but was rendered the ACC offensive lineman of the week by the Tiger coaching staff’s system (94). Stewart was again the lowest grader on Clemson’s O-line by PFF this week (49.7) with a penalty attributed and marks slightly above 50 in both pass (51) and run blocking (53.4). -- Brandon Rink