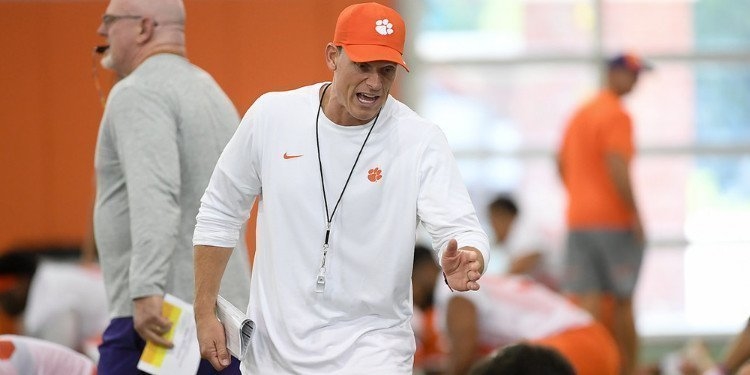 CLEMSON – Clemson’s newest batch of defensive players in the back seven haven’t been shy about making their way into the Tigers’ football operations building, and if they don’t get a set of keys soon, Brent Venables they are going to break the door down so they can watch film.

Defensive backs Andrew Booth and Jalyn Phillips and linebackers Vonta Bentley, Keith Maguire, Greg Williams, Kane Patterson, and Bryton Constantin have only been on campus since mid-June, but have already made an impression the Tigers’ defensive coordinator.

“You just kind of label them from seeing them every day, and you get feedback from the other coaches and feedback from the strength staff,” Venables said. “That whole group of guys is a very focused group of guys that we brought in. Very serious. I walked out from upstairs and they are up there watching tape. Any time I have been in this building this summer, people have been in the meeting rooms every single day.”

Those players are kicking the door down to watch film.

“I have been very, very encouraged with the commitment and the leadership and that doesn't happen if guys aren't leading them into that room,” Venables said. “But a lot of it is that they are kicking the door down, too. They want a set of keys so they can watch film. Again that is a maturity and the value of studying the game and the system and trying to learn it and those types of things. It's an ambitious group of guys that I really look forward to coaching.”

With Clemson’s defensive depth in question heading into fall practice, many of the younger players will have to play and Venables was asked how they will handle the pressure. His answer? They get more pressure in practice than they will ever get in a game.

“They can't get any more pressure from expectations than what we apply to them every day. We put more pressure on them and try to define winning and losing every single play of practice,” Venables said. “So, I think it's easy for them to get away from us out on the field. We try to strain them so that it is second nature for them. Coach Swinney does a great job of creating a mindset and a focus and it takes a mature group of guys to decide they are not going to listen to anything good or bad and let it affect them. The best of the best have the ability to put the focus on where it needs to be. You have to focus on what is sitting right in front of you and we create this incredible pressure on them every day.

“Game day is relatively easy on our guys. We don't have a monopoly on that, but every day and every single thing matters. From how you walk onto the practice field and how you stretch to showing up early and staying late and how you respond to adversity. We are trying to strain them at the highest level you can. We are trying to encourage them and lead them but then strain them as well. Pressures and expectations? I don't buy any of that. Ever.”