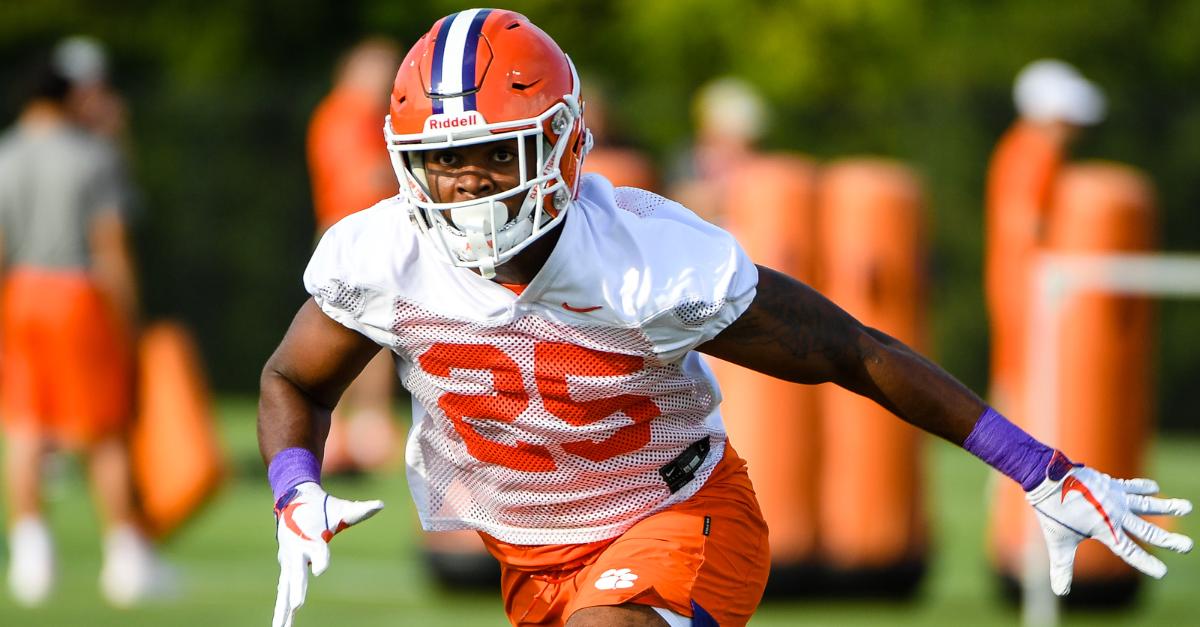 Jalyn Phillips during a drill

The No. 1-ranked Tigers held the first August practice of the 2019 season, offering the media a chance to watch the members of the 2019 class that have arrived since June.

Keep in mind – our time was limited but David Hood, Nikki Hood, Tommy Crumpton, and Brandon Rink were all in attendance to gather a few thoughts.

It’s easy to see why Patterson played all over the field in high school. Patterson is an elite athlete who looks like he can be a run stuffer but also excel in coverage. He can turn on a dime – a must for a backer against spread offenses these days. He and a few of the other freshmen backers were struggling early on as linebackers coach Brent Venables brought the stress early. He’s a candidate for early playing time.

We wrote yesterday that Dukes looks like he can be a weapon coming out of the backfield. He lacks the straight-ahead burst that Lyn-J Dixon has, but he has plenty of speed to get into the next level. We obviously weren’t allowed to watch pass blocking drills, but if he can block he could see the field early.

Simply put, Mellusi looks like he’s been in a college weight program for a few years. There is no doubt that Adam Choice and Travis Etienne were the battering rams last season, but Mellusi already looks like he could be a weapon in short-yardage situations. Mellusi comes from an option attack in high school so there will be an adjustment period for the spread.

Booth showed off his athleticism during punt return drills, and it says a lot about what the coaches think of his ability that he was back there on the first day. He played some wide receiver in high school and has the ability to make people miss in the open field. I didn’t watch a lot of him during defensive drills, but the few I did watch were enough to convince me he’ll battle for playing time. He can close fast. 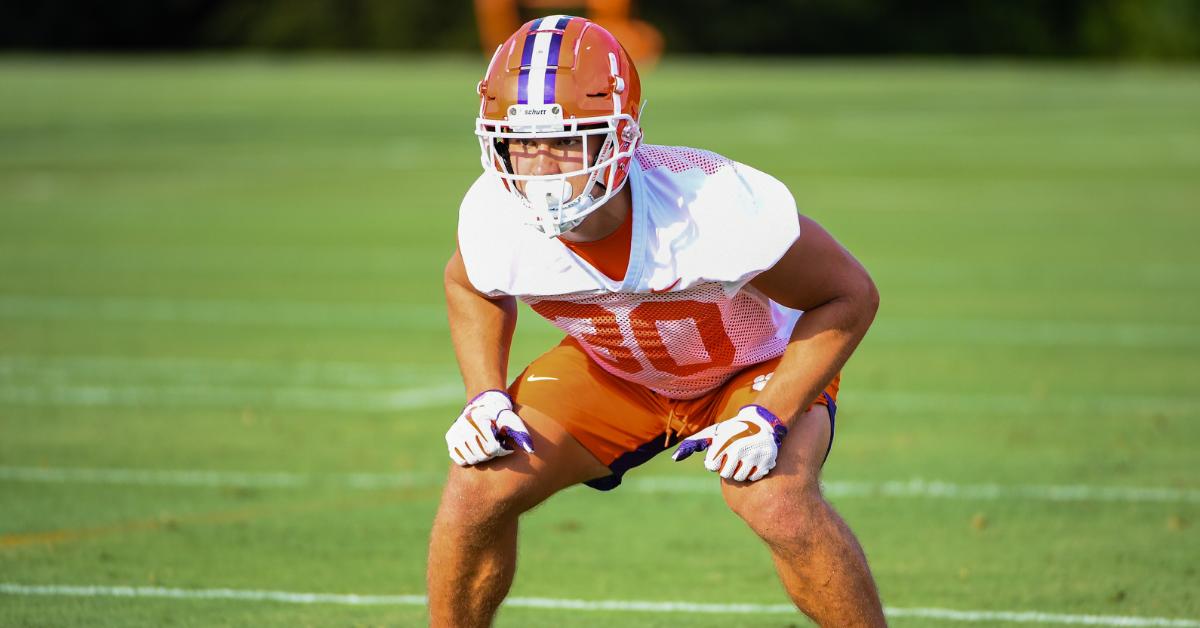 Phillips warmed up in front of us and I had to do a double-take when I realized he was one of the freshmen we were looking for. He has the size and speed to play anywhere in the back seven and has that look a guy who can fill an alley and pop a ballcarrier or drop back in coverage and make a play.

Maguire reminds me of a younger Ben Boulware. During the early part of drills he showed an ability to get low (a must for a backer who has to shed blocks) and good change of direction. He’ll have to add upper body strength, but the tools are there.

Things were a little fast for all the backers, but Venables loves to say he likes to say “whoa” rather than “go.” Bentley looks like a boulder out on the field, and he looks like the kind of player that wants to be a leader. I’ve seen him in enough camps to know that he has explosiveness and is a straight-up hitter. Nothing that happened Friday showed me that he was overwhelmed. 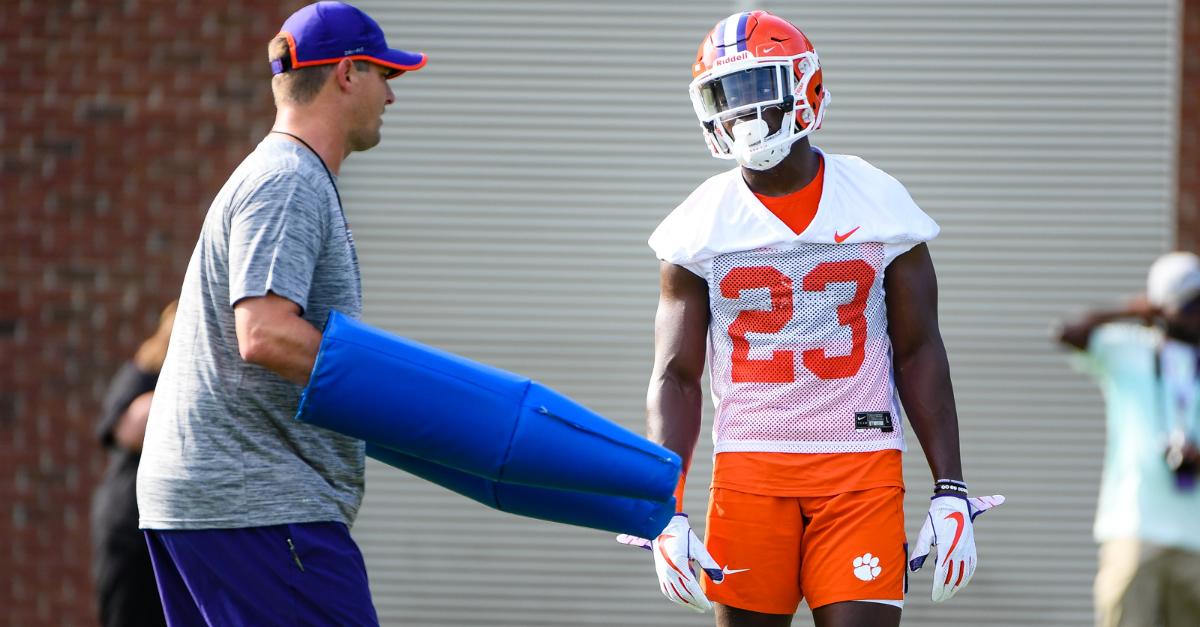 We knew that Williams was a physical specimen before he got to Clemson – I have a picture that was taken on one of his recruiting visits where he stood beside former linebacker Tre Lamar and matched his height and beat him in reach and wingspan. With that in mind, he will make the transition to defensive end. He will have to get used to playing with his hand in the dirt, but the athleticism is there.

Johnson has already impressed his teammates. He arrived on campus a little overweight and there was some concern, according to veteran Jordan Williams, that Johnson wouldn’t make weight. However, he came in right on target at Thursday’s weigh-in. Williams also said that Johnson came to him early in the practice and said that things were going a little fast, but Williams helped get him settled. He’s a fast learner and it won’t be long before he’s pushing for playing time.

We didn’t get to see a lot of the younger offensive linemen. However, Trotter weighed in at 262 so he has a ways to go before he’s ready to break into any kind of rotation. The good news – he can redshirt this season and spend time with Joey Batson and crew in Power Hour.