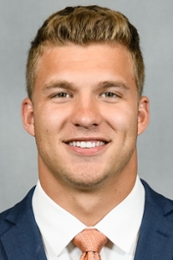 Linebacker
B I O
Enters 2022 with 33 tackles (4.0 for loss), a forced fumble, an interception and two pass breakups in 208 defensive snaps over 28 career games.
2021:Credited with 15 tackles and a pass breakup in 99 defensive snaps over 13 games … recorded a tackle and a pass breakup vs. SC State … added one tackle vs. Georgia Tech and at Syracuse … made one tackle at No. 23 Pitt … added three tackles vs. UConn … recorded two tackles at South Carolina … contributed a career-high six tackles vs. Iowa State.
2020:Credited with 16 tackles (3.0 for loss), a forced fumble and a pass breakup in 100 defensive snaps over 11 games …contributed three tackles (one for loss) and a pass breakup at Wake Forest … added another three tackles vs. The Citadel … made one tackle at Georgia Tech … recorded two tackles vs. Syracuse … registered one tackle at No. 4 Notre Dame … added a tackle vs. Pitt … notched five tackles (two for loss) and a forced fumble at Virginia Tech.
2019: Credited with two tackles (one for loss) and an interception in nine defensive snaps over four games while redshirting … made collegiate debut vs. Georgia Tech … recorded a three-yard tackle for loss at Syracuse … added a tackle vs. Charlotte … notched first career interception in the ACC Championship Game vs. No. 22 Virginia.
In High School: Talented four-star linebacker who ranked as the best player in Pennsylvania by some services … had strong 2018 season, leading his team to third straight Inter-AC Championship in a row … as a senior, had 106 tackles, 18 tackles for loss, five sacks and four interceptions … also had 313 yards rushing and 314 receiving on the offensive side of the ball … scored 14 total touchdowns … two-time conference MVP … named all-state in 2017, and the 2018 team was not yet announced at the time of his signing … No. 219 player in the nation by Rivals.com … that service also ranked McGuire as best player in Pennsylvania and 11th-best outside linebacker … seventh-best player in Pennsylvania by 247Sports … No. 26-best outside linebacker by PrepStar … led his conference in tackles as a junior … had a touchdown catch in 2017 that was the No. 2 play of the day on ESPN’s SportsCenter … played high school football at Malvern Prep for Dave Gueriera … very active in community service, he went on a 10-day trip to Dominican Republic in June to help build homes … also played on lacrosse team at Malvern … from same conference that produced Matt Ryan (Atlanta Falcons) and Mike McGlinchey (Notre Dame All-American) … Clemson recruiters were Brandon Streeter and Brent Venables … committed to Clemson on April 27, 2018.
Personal: Born Nov. 20, 2000 … financial management major … two-time ACC Honor Roll selection (2019-20).
Note: Tackle stats in the bio above reflect statistics from coaches film review. Tackle stats in the table below reflect those as awarded by gameday stat crews.