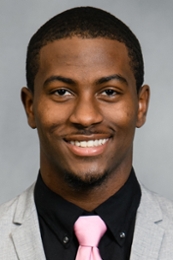 Cornerback
B I O
Enters 2022 credited with 52 tackles (1.5 for loss), eight pass breakups, two interceptions and a fumble recovery in 855 defensive snaps over 38 games (11 starts).
2021: Had a career year despite playing behind two first-team All-ACC selections, compiling 24 tackles, four pass breakups and an interception over 415 snaps in 13 games (three starts) … recorded three tackles vs. SC State … contributed two tackles at NC State … added seven tackles and two pass breakups in a start vs. Boston College … registered two tackles and a pass breakup at Syracuse … contributed another two tackles at Louisville … recorded two tackles and his first interception of the season vs. UConn … contributed a tackle and a pass breakup vs. No. 13 Wake Forest … made three tackles at South Carolina … added two tackles vs. Iowa State.
2020:Credited with 22 tackles (1.5 for loss), three pass breakups and an interception in 300 snaps over 11 games (eight starts) …made first career start at Wake Forest, adding two tackles … split a tackle for loss among his two tackles vs. The Citadel … recorded his first career interception vs. No. 7 Miami, sharing team defensive player of the game honors … added a tackle at Georgia Tech … credited with three tackles vs. Syracuse … contributed two tackles vs. Boston College … recorded six tackles (one for loss) and a pass breakup at No. 4 Notre Dame … added two tackles at Virginia Tech … made one tackle in ACC Championship Game vs. No. 2 Notre Dame and in Sugar Bowl vs. No. 3 Ohio State.
2019: Credited with six tackles, a fumble recovery and a pass breakup in 140 defensive snaps over 14 games … recorded a pass broken up in collegiate debut vs. Georgia Tech … added two tackles vs. Charlotte … posted a tackle vs. Florida State and vs. Boston College … registered a tackle and fumble recovery vs. Wofford … added a tackle at NC State.
Before Clemson: Ranked among the top 100 players in the nation by ESPN.com and Rivals … ESPN.com ranked Jones as 69th-best overall player, second-best player in the state of Virginia and seventh-best cornerback in the nation … ranked 91st overall by Rivals, fourth-best from the state of Virginia and ninth-best cornerback in the nation … 247Sports ranked him as eighth-best player in Virginia … ranked as four-star prospect by all three services … two-way player, who had 45 tackles, two interceptions, one he returned for a score, in 2018 … as a receiver, had 17 receptions for 347 yards and two scores … selected to World Bowl in Mexico and Under Armour All-American game … played his high school football at Maury High School under Dyrri McCain … Clemson recruiters were Mike Reed and Brent Venables … committed to Clemson on April 20, 2018 … enrolled at Clemson in January 2019.
Personal: Born Oct. 25, 2000 … majoring in communication … his brother, Kennedy, plays baseball at UNC Greensboro and is the school’s single-season record-holder for RBIs as well as the 2022 SoCon tournament MVP … completed a microinternship with Adobe in spring 2022 … two-time ACC Honor Roll selection (2019 and 2021).
Note: Tackle stats in the bio above reflect statistics from coaches film review. Tackle stats in the table below reflect those as awarded by gameday stat crews.