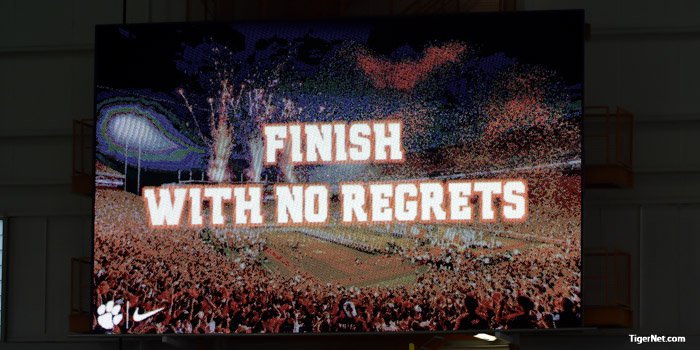 Tavien Feaster wearing a Spiller patch on his jersey at practice on Tuesday.

CLEMSON – Finish with no regrets. Let the new journey begin.

Clemson’s football team held the first practice of fall camp under steamy conditions Tuesday afternoon, and practice started with a video on the scoreboard in the indoor practice facility that touted the above statement.

Replays from last season were shown – including the loss to Alabama – and the scoreboard flashed Finish With No Regrets throughout the early part of the session. Michael Buble’s Feeling Good (It's a new dawn. It's a new day. It's a new life) blared from the speakers.

Looking at the freshmen who are finally on campus, it’s a new day indeed.

In fact, this might be the best looking group of players that head coach Dabo Swinney has put on the field. This group – from a depth standpoint – has big and athletic bodies all over the place and at every position.

It remains to be seen if the 2016 running back corps will be the most talented ever at Clemson, but this group certainly looks the part. Starter Wayne Gallman is thicker than he was a year ago, is explosive and looks like a man on a mission. Tyshon Dye ran with the second team and he looks the best he’s looked in the four years he’s been on campus (he’s a redshirt junior). Enter Adam Choice who is coming off a redshirt season after tearing his ACL late in his freshman season. Choice looks like a bowling ball. He’s thick, powerful and runs low to the ground.

Everyone wants to know about 5-star Tavien Feaster and he looks like he’s ready to contend for snaps. He was sporting some sort of shoulder brace or harness after having surgery to repair a torn labrum in his left shoulder. The Spartanburg native looks thicker and bigger than the last time I saw him at the Shrine Bowl. His explosiveness can’t be overstated and if he can stay healthy may give people flashbacks of the last person to wear No. 28 – C.J. Spiller. 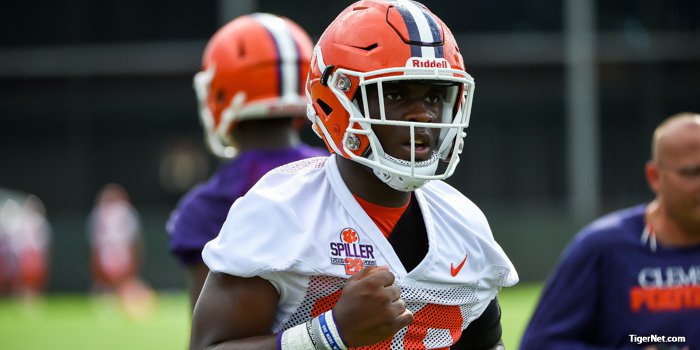 Tavien Feaster wearing a Spiller patch on his jersey at practice on Tuesday."

Deshaun Watson looked as good as usual, and dropped a gorgeous pass to Mike Williams in the end zone for a touchdown. He wasn’t wearing his knee brace, and he showed his usual speed.

Kelly Bryant was accurate during the sessions we got to watch, and you can tell his training sessions with quarterback guru Ramon Robinson are paying off. In fact, both Nick Schuessler and Bryant were accurate in the parts we got to watch.

Meanwhile, freshman Zerrick Cooper had his ups and downs (it’s his first college practice), but there were a lot more ups. When the ball comes out of his hand, it reminds me of Deshaun Watson. There is no doubt about his arm strength, and he threw a beautiful fade to Deon Cain for a significant gain.

Mike Williams looks better than ever. He was running free and easy and diving all over the place and generally being a nuisance to any defensive back who dared face him. Williams made several tough catches look easy. If he’s healthy, it’s gonna be a big year. His body type is just different than any Clemson receiver in recent history.

Meanwhile, Deon Cain is a bad, bad man. He looked genuinely happy to be a part of the proceedings and was flying all over the place. Same goes for Hunter Renfrow, Artavis Scott, Ray-Ray McCloud and Trevion Thompson. Each one had their moments.

Now to the freshmen – Cornell Powell is just smooth when he runs routes. Extremely smooth. I can see where he gets playing time this season. As one observer put it, he just has “it.”

Diondre Overton and T.J. Chase both had their moments – good and bad – but it’s easy to see the athleticism both bring to the table. And Overton went high over a defender to make a catch, shades of Williams’ earlier catch.

One of the first periods of every practice is the special teams period. While we didn’t get to see a lot because the players were just beginning to get concepts and the coaches were working out a number of different players, there were a couple of notes.

*First is that Artavis Scott – who as been a mainstay at punt returner since the Russell Athletic Bowl against Oklahoma – was not working in that role Tuesday afternoon. He was actually working on the punt coverage unit. Danny Pearman said before the season that the key to good special teams play is finding guys who want to play and Scott is a guy who is willing to do whatever to help his team win.

Taking Scott’s place in the return role were Ray-Ray McCloud, Adrien Dunn, Cornell Powell and Tavien Feaster. McCloud looked more comfortable field punts than he did a year ago. Feaster and Powell – while still learning – both look like naturals. They look comfortable catching the ball and are explosive after the catch.

*Clemson may have a three-way battle at punter this season. Incumbent Andy Teasdall will be pushed by walk-on Will Spiers and wide receiver Hunter Renfrow. All three had very good moments and even had a couple of booming punts, but this competition will come down to consistency. Who can make the kicks day in and day out.

*Greg Huegel looks like he picked up where he left off with field goals.

We will get more into the line tomorrow, but freshman John Simpson impressed me. He has the athleticism and big body you love on the line. Jake Fruhmorgen’s added weight hasn’t slowed him down – he has a great kick step and hasn’t lost any of his quickness. The other freshmen – Tremayne Anchrum and Sean Pollard – are already beginning to look like veterans.

Veteran Tyrone Crowder was carted off for unknown reasons, but it looked like cramps to me. We'll have more after interviews.

Dexter Lawrence was the one everybody wanted to see, but this entire group looks solid. Scott Pagano looks quicker than I’ve seen him, and Albert Huggins looks like he’s reshaped his body. Lawrence doesn’t look like he’s 342 pounds – he looks like he’s in the 315 range – and he moves so well. Carlos Watkins is the unquestioned leader of this group, and I could hear him coaching up the younger players.

Christian Wilkins spent the entire session – what we were allowed to watch – with the tackles.

This is the group that head coach Dabo Swinney identified as the biggest question mark in his preseason press conference before Tuesday’s practices. However, after seeing Marion Hobby’s group in action, I don’t think they’ll be a question mark for long.

Let’s start with Xavier Kelly – the freshman out of Kansas. When you first look at him, he looks a lot like Shaq Lawson but taller. Kelly is 6-6, 259 as a true freshman. He has a thick lower body and looks like he’s been in a college weight room for quite some time. At the NFL Combine, Lawson was 6-3, 269.

Austin Bryant is tall and covers a lot of ground of quickly, while Clelin Ferrell –who will get the first look opposite Bryant – is strong and has a first step that will remind you of first-round draft pick Vic Beasley. However, when you look at that group, the first person who jumps out at you is Richard Yeargin. The Florida native has totally revamped his body and looks the part of defensive end.

I thought Mark Fields had a good session. He looks quicker than last season, and he was more sure in his movements. Freshman Trayvon Mullen made a great play on an out route early in the session, and safety Isaiah Simmons is one of those that just makes you go “wow.” He’s impressive physically and made several nice plays against faster receivers in coverage. He could be a second option at safety.

K’Von Wallace also made some nice plays, but like all freshmen had his moments where it showed. The athleticism and cover skills are there, however. Same goes for Denzel Johnson – he was impressive in the abbreviated session.

We got see a lot of Korrin Wiggins, who was wearing a brace on his knee. Wiggins didn’t look like he had any trouble moving laterally and actually had a nice play on a pass to Renfrow.

We’ll start with Ben Boulware who is leader of the defense and will be a team leader with Deshaun Watson. At 233 pounds, Boulware will be a force at the weakside (WILL) linebacker spot.

Tre Lamar and Shaq Smith – both early enrollees – immediately jump off the page at you. They have the height and overall size that hasn’t been seen at Clemson in quite some time. Boulware was right when he said that Lamar and Smith have beautiful football bodies. How quickly they pick up the defense remains to be seen, though.