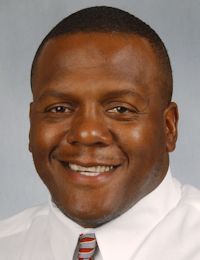 B I O
•Clemson has finished in the top 25 all of his five years as an assistant coach, including a No. 2 final ranking in 2015 after helping the Tigers to the National Championship Game.

•Coached First-Team All-American Shaq Lawson, a finalist for several national awards, in 2015. Lawson was responsible for 25.5 tackles for loss, while adding 12.5 sacks. He also coached Honorable Mention All-ACC performer Kevin Dodd, who had 23.5 tackles for loss and 12 sacks. The duo finished 1-2 nationally in total tackles for loss.

•His defensive ends were a big reason the 2014 defense led the nation in total defense (260.8) and tackles for loss (131), while being in the top five in many other statistical categories. He also coached Vic Beasley, who was a first-team All-American and the ACC Defensive Player-of-the-Year. Beasley set the school record with 33 career sacks.

•His defensive ends were a big reason Clemson led the nation in tackles for loss (122) in 2013.

•Coached Beasley, a first-team All-American and Hendricks Award finalist, who had 23 tackles for loss and an ACC-high 13 sacks, in 2013.

•Beasley was a seldom-used backup in 2011, but became one of the top defensive ends in the ACC in terms of sacks in 2012. Beasley had eight sacks, fourth-most in the ACC, in only 288 snaps.

•In 2011, he coached second-team All-American and First-Team All-ACC defensive end Andre Branch, who led the ACC with 17 tackles for loss and 10.5 sacks. Branch was also a finalist for the Hendricks Award.

•This is his second tour of duty at Clemson. He served as defensive line coach in 2005, helping the Tigers to an 8-4 record and a top-25 AP finish. Clemson was 11th in the nation in scoring defense.

•Prior to coming to Clemson, he worked for David Cutcliffe at Mississippi for six seasons (1999-04). During that time, the Rebels had a 44-29 record and four bowl wins.

•First-Team All-SEC pick in 1989 and was named to Tennessee’s 100-year anniversary team. A third-round draft pick (No. 74 overall) of the Vikings and later played three years (1990-92) with the Patriots.