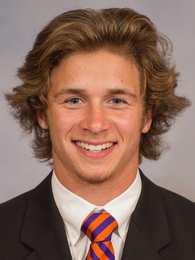 Wide Receiver
B I O
Junior is an original walk-on ... has five catches for 37 yards in 79 snaps over 11 games in his career.

2016: Put together a 30-yard punt return against SC State, but suffered a torn ACL on the play and missed the remainder of the season.

2015: Played 40 snaps over six games ... had two catches for nine yards, one against Wofford and the second coming in the lopsided win at Miami.

2014: ACC Academic Honor Roll member ... had three receptions for 28 yards and one punt return over four games ... had two receptions for 11 yards and one punt return against SC State on Sept. 6; it was his first career game ... played six snaps against NC State on Oct. 4 ... played five snaps against No. 24 Oklahoma in the Russell Athletic Bowl on Dec. 29 ... had a six-yard reception in the Spring Game.