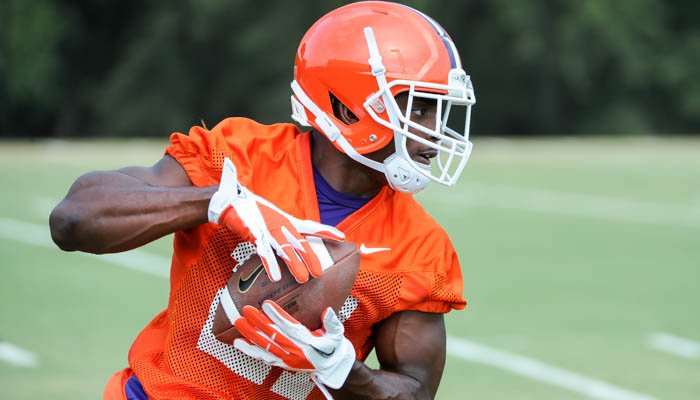 CLEMSON – The Tigers were originally scheduled to practice in Jervey Meadows Tuesday evening, but storms and heavy rains forced players and coaches into the indoor practice facility.

Dabo Swinney
Head Coach
View Full Profile , who is still in Alabama after the loss of his father, but the players didn’t take the day off as Tuesday’s practice was highlighted by periods of goal-line work and what Swinney calls good on good.

The media met with Germone Hopper

The junior wide receiver has spent much of his career trying to break into the starting rotation on special teams, and he said that he and every other player are taking their commitment to special teams serious.

Hunter Renfrow
RS Fr. Wide Receiver
#13 5-10, 170
Myrtle Beach, SC
View Full Profile ,” Hopper said. “We've just got guys on top of guys who can take the role and do it at any time. We're just trying to take it serious to just get in the realm of the four teams that made it into the playoff- Oregon, Alabama, Ohio State and Florida State.”

Clemson has ranked in the bottom half of the ACC in kick return and punt return over the last couple of years, but Hopper said he and his teammates are working hard to change that.

“We're taking the return game more serious,” Hopper said. “We're at the bottom of the ACC and we're trying to take it to the top-five. We're just trying to get better day-by-day. We're working multiple guys at kick return and punt return.”

What’s it going to take to improve the Tigers’ return game?

“We're taking each rep more serious - don't take any play off in the return game. We're trying to do the little things like looking the ball in, getting that 15-yard burst after we catch the ball and not throttling it down,” he said.

Johnson breaks down the defensive back rotation

Tanner Muse
Fr. Linebacker
#19 6-4, 205
Belmont, NC
View Full Profile are at free safety. Coach Reed rotates every now and then. Jayron knows both positions, so he'll go from strong to free. I only know strong and T.J. only plays free.

Cordrea Tankersley
Jr. Defensive Back
#25 6-1, 195
Beech Island, SC
View Full Profile , they've got him at the boundary corner with the free safety. It's Cordrea and Mark Fields

Redshirt year pays off for Blanks

Linebacker Travis Blanks decided to take a redshirt year in 2014 to work on the mental aspect of his game and recover from a torn ACL. Despite re-tearing his ACL, he said he made the right decision.

“I'm glad. I made the right decision, even though I got hurt through that redshirt season,” Blanks said. “I just wasn't ready mentally and physcially. It would've done myself a disservice to try to live up to expectations and try to do what everyone wanted me to do if I wasn't mentally and physcially ready. At the end of the day, I made the right decision.

A year later, Blanks said he is as healthy as he’s ever been.

A healthy C.J. Davidson is ready to run again

Davidson has been plagued by injuries during his two years on the football team. However, said he’s now healthy and ready to run.

“I'm as close as I'm going to be to 100-percent,” Davidson said. “I feel like I'm in high school again. I feel like I'm just as healthy as I was when I was running track. I'm just blessed to say that I'm healthy again, so I'm ready to play fast.”

Armed with more knowledge of the offensive system, Davidson said he can run without thinking quite as much.

“I can think back to when I was first getting the ball and I was just out there running. Now, I feel a lot more comfortable within the system,” he said.